I turned the heat on today. I blame Lexi. She’s borderline sick today and keeping the house at 61 degrees doesn’t seem very wise. Though all things considered, it’s the second latest date we’ve turned on the heat:

It might help that I’m going to be homeless tonight and the thought of a warm house is more than enticing.

You can’t fake an awesome band name like that. Unicorn Dream Attack is an 8-bit electronica band from Minnesota. They make music from things like Game Boys and Nintendos. Most of this type of music grates on me pretty quickly, but this stuff is a little more musical (not much, it’s still plenty of bloops and bleeps). Plus: Stellar band name. MPR covered the band today.

My local public art side project, Start Seeing Art, is now accepting sponsorship. It’s basically advertising—rotating banners in the sidebar—but I hate to use the word “advertising” because the site doesn’t justify the eyeballs to use that word. We get minimal traffic thanks to our extreme niche, so it’s more of a generous subsidy than a mutual exchange. If you or anyone you know would be interested in supporting public art by sponsoring Start Seeing Art, please send ’em to the support page.

The sponsorship banners are $25 per month (cheap!), with a maximum of five banners each month. So even if I sell all available space I won’t be getting rich ($125/month). More than anything this is an effort to bring some kind of revenue, any revenue, into the site. I’ve been running the site since November 2007 and we’ve mapped 371 works of local public art. That’s a lot of work. And a lot of gas. In that time we’ve made a whopping $20.36 from the Google ads (I think we’re too niche and too local for Google ads to be of much use). If the sponsorship banners sell I’ll probably drop the Google ads.

I’ll keep exploring other ways to make the site work. Grants are the most likely option, but it gets complicated since I’m not a nonprofit—unfortunately not making a profit doesn’t make you a nonprofit, as the joke goes. Hopefully we’ll figure something out and I can justify the time I put into the site.

“I am not qualified to comment on the interventions that have been put forth. I can assume these people know what they’re doing. But is is extraordinary to me that you can find $700 billion to save Wall Street and the entire G8 can’t find $25 billion to save 25,000 child who die every day of preventable treatable diseases and hunger. That is mad. Bankruptcy  is a serious business. And we all know people who have lost their jobs this week,  I do anyway. But this is moral bankruptcy.”

I agree with Bono on both counts: I’m not qualified to comment on the bailout yeah or nay, but I do think it’s amazing that we can shell out a ton of money for all these bailouts but we can’t spend a much smaller sum of money to save lives.

It’s much more complicated than this, but saving lives seems more important than saving the economy. 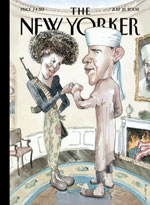 Again, but what if he was an Arab? Who cares? END_OF_DOCUMENT_TOKEN_TO_BE_REPLACED 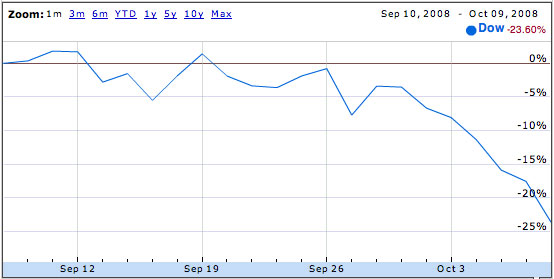 Down 23.6% in one month. Ouch. Yeah, that’s a brutal looking graph. But we need more perspective. END_OF_DOCUMENT_TOKEN_TO_BE_REPLACED

PRI’s The World has a fascinating series of stories on how wars end. The series is looking at past wars to give insight into how the Iraq war might end. Yesterday’s story covered the end of the Civil War and the failure of Reconstruction.

What’s so interesting is the assertion that the Civil War didn’t end at Appomattox. The battle continued, though it wasn’t always a military battle (though people still died):

Stephen Biddle of the Council on Foreign Relations says it helps him understand how it’s possible to win the war, capture the capital but still lose the peace. He notes the North won the big military contest between 1861 and 1865, but that didn’t end the struggle. And over time, Biddle points out, Southern resistance paid off. In 1877 President Rutherford Hayes withdrew Northern troops from the South.

“And the South proceeds to essentially run out the Northern installed governments of the remaining Southern states, institutes what amounted to white one-party rule, removed blacks from voter rolls throughout the South and established a system of segregation, and that system remains to a significant degree all the way up until the civil rights movement of the 1960s.”

Biddle says if you look at in political terms, it’s possible to construct an argument that the South actually won the war.

That’s quite a claim, but it’s interesting to consider. If the Civil War was fought to bring freedom to blacks, you could argue that freedom wasn’t fully achieved until Martin Luther King Jr. and the civil rights movement. How’s that for a long view of the conflict? Never thought I’d consider MLK a Civil War hero. That’s probably taking it a bit far, but it’s interesting to consider and is a strong counter to the myth that the Civil War ended amicably at Appomattox.

Let’s revisit a good theme: Top 100 Book Cover Designs from the AIGA. The flash navigation is atrocious and the Stephen Colbert design seems kind of pedestrian (hence the top 99), but otherwise there are some incredible book covers here. (via kottke.org)