Love, laughter and lunacy in 140 characters.

A work-at-home dad turns to Twitter to share updates about kids, causes and life. It’s a curated selection of bizarre quotes, funny stories and temper tantrums. Woven between potty-training woes and breakfast time songs is a family growing through adoption and learning how to change the world, one status update at a time.

A book that talks about a bunch of causes but doesn’t do anything is kind of silly. So let’s do something. Let’s build a well. A portion of the proceeds from this book will go to charity: water to fund a clean water well in Ethiopia.

Update: We did it! On September 22, 2010 our campaign hit the $5,000 goal to fund a well in Ethiopia. Incredible! At this point additional money will continue to help charity: water provide clean water.

In the fall of 2012 we received an email that the well was completed. Check out the pictures and learn more about the well you built.

Logistics
A well costs $5,000. A portion of the proceeds from each copy of Addition by Adoption is donated to the well (if you buy on Amazon $2 is donated). You can also skip the book and make a direct donation to charity: water.

Why Build a Well?
In late March 2009 we traveled to Ethiopia to bring home our son Milo. While there, we witnessed the reality of unclean water:

We know firsthand what a lack of clean water can do.

Why charity: water?
charity: water is an organization that brings clean, safe water to people who need it. For $20 they can provide one person with clean water for up to 20 years. They’re great about proving their work and partnering with organizations already on the ground (Living Water International, A Glimmer of Hope, Healing Hands, Concern, etc.). They do a lot of work in Ethiopia (35% of their work, in fact), they’ve been featured on CNN and ABC News, and 100% of money donated goes to water (administrative costs are covered by private donors). charity: water is the organization I supported with the 2009 Bald Birthday Benefit.

There are a lot of great organizations that provide clean water, pick your favorite and support them. I’ve picked charity: water.

It’s a curated selection of tweets, pulling out roughly 500 Twitter posts from more than 3,000. I’ve pulled out the good stuff and organized it into logical chapters with their own introduction. I’ve also cut out the technical jargon, the hashtags, the links and the clutter that wouldn’t make any sense in a printed book.

The result is a compelling narrative in a concise, 82-page book. Who would have thought you’d find that from a bunch of tweets?

Credits
A number of people have helped with the book (too many to mention), but a lot of credit goes to Brian White of TriLion Studios for the cover design and Ronald Cox for the interior design. Some of the photos also came from Barbara O’Brien.

Bonus Content
Since a book of Twitter posts is still a book you lose some of those links to interesting content. So now you can check them out:

Causes we talk about in the book:

Of course you can follow the continuing adventures of Kevin, Abby, Lexi and Milo on my blog and on Twitter. I’ve also started a page collecting all sorts of Ethiopia-related links and resources.

10 ways you can help spread the word about Addition by Adoption:
Thanks in advance. 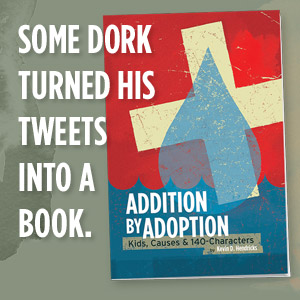 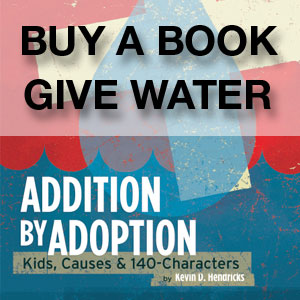 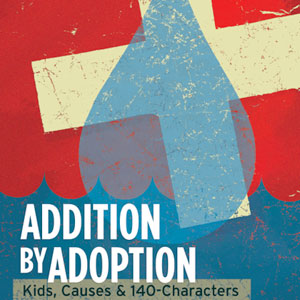 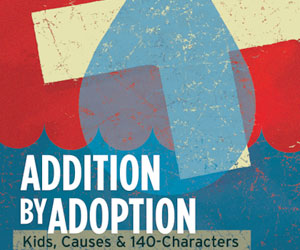 You’re welcome to use the full book cover as well: