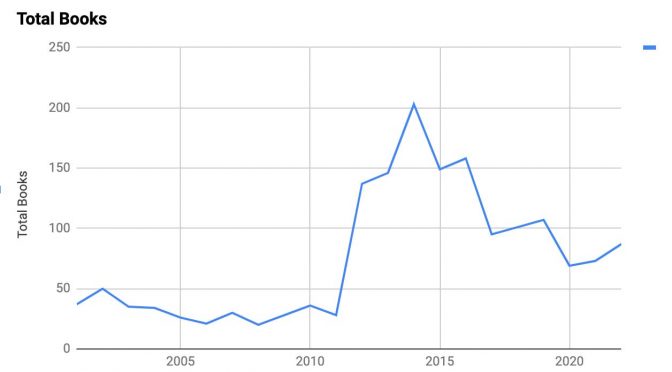 Here are my top 10 fiction and top 5 non-fiction for 2022, as well as my reading stats for the year.

While my reading was up, it was still a tough year for reading. The invasion of Ukraine in February proved to be a big distraction with doom scrolling and not finding a good read.

Curious about more timely trends, I started tracking how many books I read each month. It creates an interesting curve that suggests I get a lot more reading done during the winter. We’ll see how that continues.

While I preach giving up on books you don’t like, I seem to have suffered through a lot of meh reads. That might explain some of the drop in reading. I really tried to get pickier, with mixed success.

Of course, sci-fi continued to be my go-to genre.

Again, if you want to read more, check out my booklet 137 Books in One Year: How to Fall in Love With Reading Again.