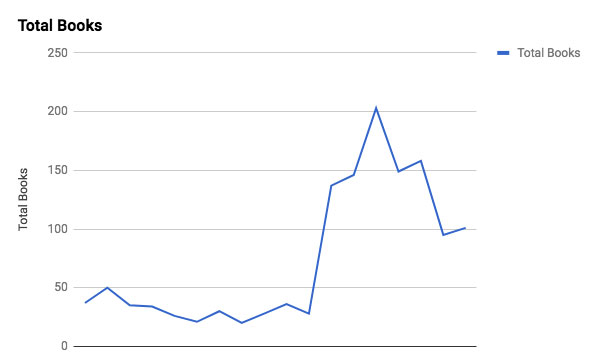 That’s down from recent years, but up slightly from last year, so I guess the good news is that I’ve kept my reading slump from getting worse?

I’m still feeling slumpish in my reading, and basically having to work hard to find things I really enjoy reading.

That means I start and stop a lot of books, and I’ve tried to steer into some of my favorite genres (sci-fi) and avoid some that aren’t doing it for me (middle grade & YA); though ironically, middle grade and YA are my third and fourth most commonly read genres (behind sci-fi and non-fiction). Though I think I still read less of those genres than last year. (I think I still find myself reading middle grade and YA because some of the most interesting stories and authors are in those genres.)

Trying to diagnose my own slump has been difficult, though it seems like chasing down interests works the best. I read a lot of sci-fi (almost a third), Star Wars (six!), and some favorite authors this year (I read three books each by Octavia Butler, Madeleine L’Engle, Jacqueline Woodson, Jason Reynolds, and Nnedi Okorafor).

It does help that I went on a major reading kick in December, especially the second half. I’ll admit, I was trying to break last year’s reading numbers, but I also just wanted to read some good books. I requested a huge stack from the library and just started plowing through them.

So that’s 2018. I’ll talk favorites (fiction and non-fiction) and statistics in other posts.