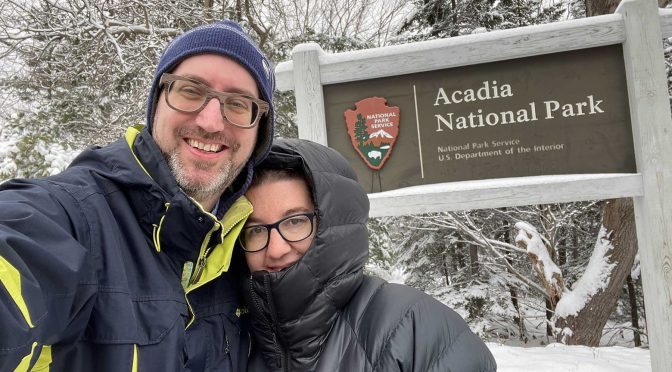 2021 became the year of vacation with trips to Theodore Roosevelt National Park, Madeline Island, Rocky Mountain National Park, and corners of Minnesota. So it’s fitting that Abby and I finished the year with a belated 20th anniversary trip to Acadia National Park in Maine.

There’s something magical about winter, and with our anniversary in December we wanted to go somewhere that still felt like winter—not an escapist trip to the tropics. We finally settled on Maine as somewhere we’d never been to before that we could feasibly get to for a short trip.

We left on Friday and returned on Tuesday, basically giving ourselves three uninterrupted days in Maine. We flew into Bangor, rented a car, and had an Airbnb in Bar Harbor, on the doorstep of Acadia National Park. The town was three-quarters shut down for the season, with lots of shops and even roads closed. The park didn’t have any visitor centers open. The place must be nuts in the summer.

The weather worked out perfectly. Saturday was in the 40s and felt like a brisk fall. Then it snowed two to three inches on Saturday night, so we set out on Sunday to see all the same things we saw on Saturday, only covered in snow.

Acadia is the northern terminus of the Appalachian Mountains on the southern coast of Maine, so we had mountains and ocean beaches in the same view. It was pretty great.

I don’t think Minnesota is much farther north than Maine (I guess it depends on where you’re making the comparison), but sunset was super early while we were there—3:54 p.m. Which meant it started getting dark at 3:30 in the afternoon. I’m used to early twilight in Minnesota Decembers, but this was something else.

On Monday morning I woke up early and went for a solo hike along the carriage roads. These are narrow roads built through the mountains and designed for scenic views. They’re closed to traffic, but with a little bit of snow were perfect for a hike. My route took me past three of the iconic bridges and a waterfall.