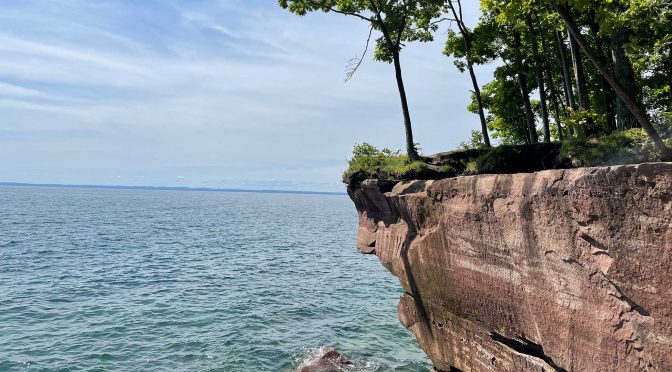 We took an abbreviated family vacation this year to Madeline Island and the larger Apostle Islands National Lakeshore. The islands, featured in The Birchbark House series by Louise Erdrich, are something I’ve wanted to visit for a while. Unfortunately, the only way to really see the islands is from the water. We finally had a chance to do that on this trip, which was truly a trip of islands.

We had some cell phone mishaps on the way that required a detour to Duluth, but we did get to stop at Pattison State Park in Wisconsin for a couple of worthy waterfalls.

Then we went on a three-hour boat tour of the Apostle Islands. It was fun to see the different islands, but the real gem is the sea caves. They’re most apparent on the farthest island out, Devil’s Island. The water was choppy the day we went, which included three to four foot waves. That was quite a ride. Thankfully for me, the sea sickness didn’t set in until after we saw the caves (I never threw up, but I spent a good hour about to).

A kayak tour might have been a better way to see the caves up close, but the big boat tour was pretty good as well (of course a kayak tour would have been canceled in those four foot waves).

The next day we took the ferry to Madeline Island for the main attraction. Everybody seems to love Madeline Island, but we found it a little underwhelming. I’m not sure if the town was still recovering from COVID and not quite back to full speed, but there wasn’t nearly as much as I expected.

The highlight was definitely Big Bay State Park. There was a short hike that had a great view of the shoreline rock formations and plenty of rocks to climb on. Definitely could have spent more time here, though lunch was calling.

On the way home we stopped at Amnicon Falls State Park, which has a tiny river slicing through the rocks and creating a small island. There are three or four waterfalls all around the island. A covered bridge connects to the island and there are trails all over. This park was gorgeous and I could have spent a lot more time here.

To finish our island-themed vacation, we hit up Capt’n J’s Mini Golf on Barker Island in Superior. One of the employees was getting married at the fifth hole when we pulled up, so we had to go get lunch and come back later.

We did manage to hit Zenith Bookstore in Duluth as well as Apostle Island Booksellers and Honest Dog Books in Bayfield to score a vacation bookstore trifecta.