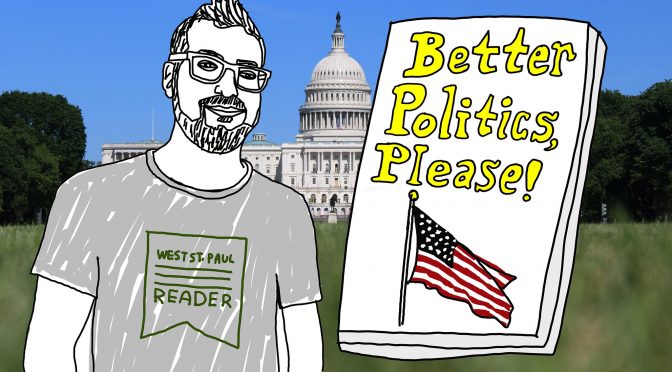 Politics can be pretty divisive and depressing. What happened to hope? Too often, politics feels like a battleground where we lob accusations back and forth. And that’s not likely to change after November’s presidential election, no matter who wins or loses.

Politics have long been divisive and people will always disagree. But I have hope that we can do better.

So I’m launching a new project. It will be a book of political profiles, titled Better Politics, Please, that will tell encouraging stories of finding common ground.

But if we want to make civic engagement civil, it starts with we the people. I hope you’ll join me in creating better politics, please.

Go check out the Kickstarter campaign, if only to see more of illustrated me (I’m really excited about that part of the project—the work of Carolyn Swiszcz is great).

I launched this project on Wednesday with a bit of fear and trepidation. You never know how these things are going to go, and talking about politics can often go so wrong (cuz politics).

It’s kind of ironic, the same day I launched a project about finding common ground I found myself arguing on Facebook with a couple people about the real impact of COVID-19. One of the scary things about politics today, and our world in general, is everything is becoming polarized. What should be a simple, verifiable fact results in a weird argument on Facebook (where it’s probably better just to walk away).

If anything, it underscores the need for this project.

Extremism and alternate facts are overwhelming our politics. It’s harder than ever to have an actual conversation with someone, and it’s driving people farther into their corners or away from the process entirely. Neither is good for our democracy.

An Idea That Won’t Go Away

I’ve been mulling this project for several months now—well before the global pandemic struck. It’s an idea that just won’t go away.

Back in December I finished up more than 15 years of work on Church Marketing Sucks. The transition has left me feeling a little adrift as I wonder what’s next.

I’m wondering if this better politics idea can be my next thing. I’ll admit, it’s kind of a wild idea and a long shot. But sometimes you have to go for it.

At the very least, you have to give it a try and get the idea out of your head. If it fails, at least you know. You can stop wondering and move on.

So that’s what I’m doing. The Kickstarter project starts with a book, and if it can generate enough support I’ll launch a website and see where this better politics conversation can go.