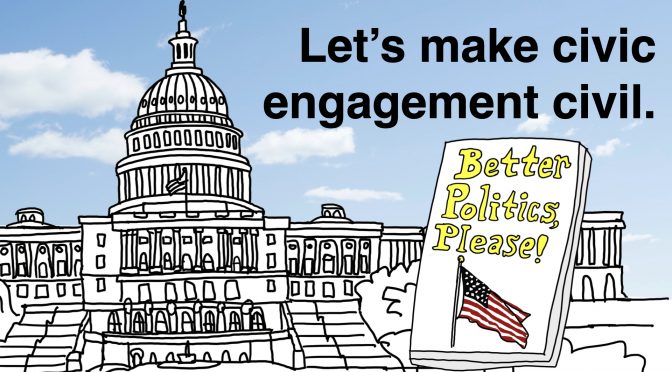 In the midst of a pandemic, I launched a Kickstarter for a new project. I’m pleasantly surprised to see people responding. We hit the initial goal last week, so the project is happening. Now we’re working on stretch goals to make it even better.

Launching a project like this is always a scary undertaking. You never know if this is a good idea that people will support or if you’re about to crash and burn.

It’s also scary because I’m talking about politics. That can be such a hot-button topic these days. Even when you think it can and should be simpler (in the midst of a global pandemic) it just gets more ridiculous.

But I’m hopeful. The whole point of the project is to find some common ground, to show that we can disagree and still get along.

Right now the project is 142% funded. That’s incredible. That means I’m writing a book and we’ve hit the first stretch goal to hire a professional designer. The next stretch goal, $5,000, is making the book bigger and better. And if we can hit $6,000—200% funded—we’ll launch a website to keep this conversation going.

That idea really appeals to me. Way back in 2004, I was sitting around a conference room table in Los Angeles when the idea for Church Marketing was hatched. That site—which I spent more than 15 years of my career working on—was all about moving a conversation about church marketing forward. What is it? Why do churches need to do it? How can we do it better? That conversation evolved over those 15-plus years, but it was a vital help to churches trying to connect with their communities.

I think a similar thing can happen with Better Politics, Please.

This past week I came across the story of Giovanni Valderas. He ran for city council in Dallas in 2019. He lost. But he also had some great ideas:

“I wish more artists ran for office, because they are often the most creative problem-solvers We know how to run a shoestring budget. Through art, we already know how to engage and motivate people. This city could benefit from more creative people running. We can’t leave it up to developers and business people who are all about the money aspect of things. Imagine how much a community could change with an artist at the helm. There would be some crazy ideas, but it would be pretty fantastic.”

He used his art to create house-shaped pinatas as a commentary on gentrification in his neighborhood. It’s a fascinating way to start a conversation and run a political campaign.

Perhaps most inspiring, Valderas didn’t quit just because he lost. He’s continued to advocate for his ideas and be involved in his community.

Whether you agree with him or not, I think that’s worth celebrating.

I hope you’ll join me and support Better Politics, Please. Thanks.