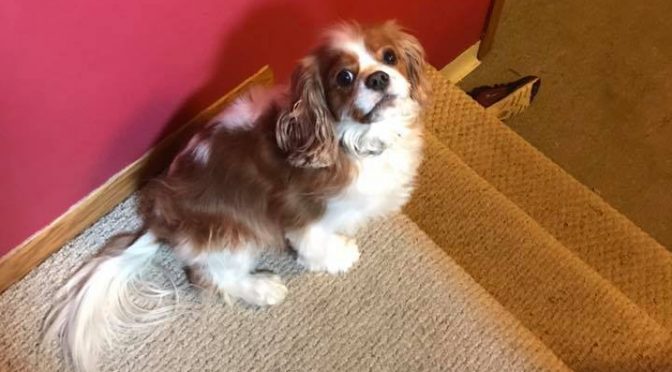 We had to say goodbye to Nick today. He had a heart condition and we knew he didn’t have long, but it still feels sudden.

Nick was always very much Abby’s dog. She was the center of his universe. Where Abby went, Nick went. Abby’s lap was his lap. I was just the guy who took him outside and gave him food. I was the one home with Nick all day, but he looked at me like a roommate.

He spent most of his days sleeping on the couch in my office, waiting for Abby to come home. He’d hear the garage door open and perk up, then jump off the couch and wait at the top of the stairs. When Abby came in and sat down, Nick was right there, in her lap, getting as close as he possibly could.

Nick was a people dog. He loved people—not quite as much as Abby, but he could soak up attention like nothing else. It made him a great therapy dog, the ability to just sit there and bask in the love. He didn’t bark or demand your attention, all pushy and needy. He’d just march right up and sit down, as if presenting himself for the petting: “OK, you may pet me now.”

I don’t know if he cared about my love as much. I was still people, so there was attention to be had, but I was mostly “Not Abby.” He would sit on my lap in a pinch, but it was more like he was getting a quick hit of attention and moving on.

I may have had some derisive nicknames for Nick, reflecting our cool, distant relationship. “Nickelback” was a good standby, maybe “Nickelodeon” (which wasn’t very derisive), but mostly it was just “Butt Dog,” because he would often poop in the house, usually in my office. He at least had the good sense to act sheepish about it.

These past few months Nick has been on medicine that made him need to go outside a lot. And somehow he finally figured out how to scratch at the door to let us know he needed to go outside, and he stopped using my office. I haven’t called him “Butt Dog” in a while.

On the way to the vet this morning, wouldn’t you know it, he pooped in my car.

I won’t hold it against him.

Nick had a short run, but he loved a lot. I’m going to miss the roommate in my office.