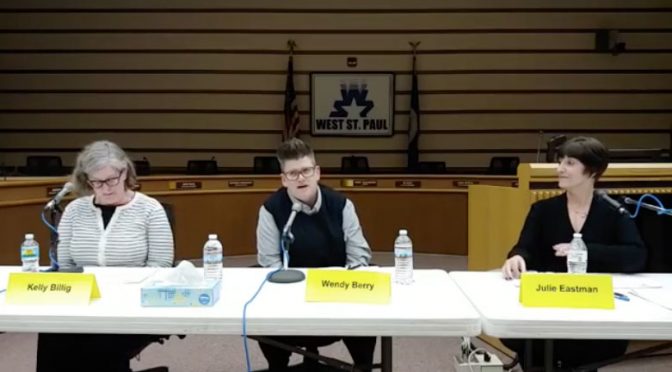 David Meisinger (no campaign site) previously served on city council (first elected in 1996, again in 2002 and resigned in 2003) and served two non-consecutive terms as mayor (most recently losing to Jenny Halverson in 2016). He runs a residential and commercial contracting business.

Let’s Get it Out of the Way

I’ve written extensively about the inappropriate behavior of David Meisinger and how he shared falsehoods and distortions during the lone candidate forum he attended.

Not Just an Alternative: A Choice

With what I’ve written above about Meisinger, you might think I’d be happy to vote for anyone who is not Meisinger. You’d be right.

But in Wendy Berry we have a candidate who is not just not Meisinger, we have a truly incredible person who I think will serve this city well. So rather than simply campaigning against Meisinger, I’ve been campaigning for Wendy Berry. I’ve knocked doors, dropped lit, written postcards, put up yard signs, and more.

Because I believe Wendy Berry is going to be a great city council member.

I wrote a detailed post about Berry’s position on the issues during the primary. Those positions haven’t changed, so go read that.

Instead of repeating myself on the issues, let’s hear directly from Berry herself.

At the Women of West St. Paul (WoW) candidate forum, Berry talked about why she decided to run. She talked about watching city council meetings and not liking how people treated each other. She met with Mayor Jenny Halverson to find out more about running.

“The biggest question, the biggest concern I had was, ‘I don’t know what I’m doing,’” Berry explained. “[But] Jenny said, ‘I didn’t either. When I ran for city council the first time I didn’t know either, and you will learn.’”

I love this quote. Because you don’t need all this experience to run for office. We have a great city staff and there are so many knowledgeable people in this community to help.

Too often we lock people out of opportunities because they don’t have experience, but then we never give them an opportunity to gain that required experience.

Part of being good in a job like this is recognizing when you don’t know it all and being willing to learn from others.

While out door knocking I talked about Berry’s human resources (HR) experience and how I thought that would help bring people together. But hearing Berry talk about it herself at the Optimist Club forum was even better:

“I don’t have a government background, I spent the last 10 years in HR. For those who’ve dealt with HR, you probably hate me right now—but I’m not that HR person.”

With her understated humor she defused an issue one person raised when I tried to talk up HR.

Berry went on to tell a story about managing a department and winning an award as a place where employees loved to work. That tells me she doesn’t just have experience with policies and forcing people to get along, she knows how to create an environment that gets the best out of people. We need that in West St. Paul.

How Does That Happen?

OK, so how do we do that? How can we make West St. Paul the best place to be?

“It’s about engagement, and that’s really important to me. It’s about engaging everyone, not just your top performers…—but everyone. The people who just moved here, the people you don’t see very often because they rent and they have two jobs and they don’t have time to come to city council meetings. It’s about finding ways to access them and not waiting for them to come to you.” (Optimist Club forum)

Engaging people sounds great, right? But what about all the conflicts we’ve had on city council with the sexism controversy and personal issues?

“The biggest thing is setting an example from the top down,” Berry said at the Optimist Club forum. “If people see that it’s OK to bicker back and forth in the city council, then of course they’re going to think that’s OK.”

“People disagree with each other, but it’s important to do so with a level of respect,” she said at the WoW forum. “It’s what grownups do.”

With the complaints of sexism on the city council, many people have been pushing for more diversity. Unfortunately, some on the city council haven’t set a great example as they try to take credit for the work of others, insist that under-represented groups need to do the work themselves, or chastise more women for not running.

It’s especially insensitive given the climate of targeted harassment and vandalism against women. And Berry speaks to this too.

“We can’t do things like go to a parade and call that a diversity initiative.” (WoW forum)

She elaborated at the Optimist Club forum:

“The thing about diversity is it doesn’t just happen. You have to work for it. So we can’t just sit and wait for people who want to be on city council or committees. We have to find ways to engage them.”

They Go Low, We Go High

Berry has responded to that targeted vandalism by organizing a tire changing clinic for women.

“It was pretty clear there was someone out there going, well, as low as our tires, because they were intimidated or feeling inferior or irrelevant,” Berry told the South West Review. “And why match that with equally as immature and childish behaviors? So we went high. We decided to educate and to empower.”

I’m struck by Wendy Berry’s parting words (and that humor again) at the Optimist Club forum:

“I would be honored to get your vote if you’re in Ward 3—Ward 2 and Ward 1 can try but it won’t work—because I feel like there’s a lot of potential for us. I’m excited to serve the people who live here. For me it’s about the community feel, it’s not a self serving thing, it’s not a title thing. It’s about making sure the people of Ward 3 have a voice on city council.”

“Excitement can equal change,” Berry said at the WoW forum. “We can be that change together, but we have to go vote to do it.”

So I’m voting for Wendy Berry in West St. Paul’s Ward 3 city council race. You can make your own decision (but, c’mon, please don’t vote for a bully) and then vote on Tuesday, Nov. 6, 2018 (or earlier). The West St. Paul city website has details on where and how to vote. You can vote early with an absentee ballot, either by mail or by stopping at the Dakota County offices.

And I’ve written a few other relevant things:

(Full disclosure: I donated to the campaign of Wendy Berry.)