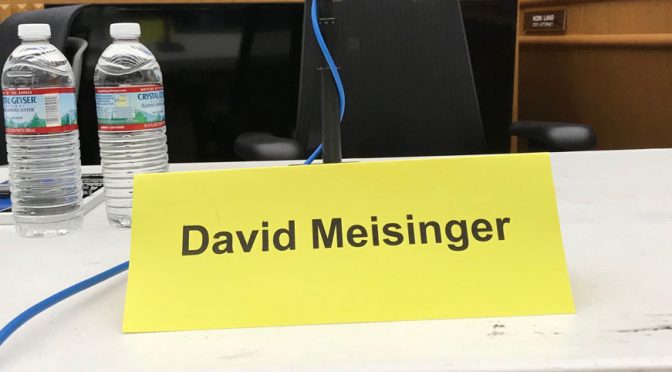 So if for some reason bullying behavior isn’t enough to dissuade people from voting for Meisinger, let’s look at his statements on the issues.

During the Town Square TV candidate forum, Meisinger bragged about his efforts to keep taxes low, claiming he kept the city to a 3.5% levy increase during his last year as mayor. He also said last year the increase was 12% and this year almost 11%.

Here are the recent property tax levy increases with the mayor at the time of the increase noted:

Meisinger has kept tax increases lower than Halverson did, but not nearly at the rates he’s claiming.

The newly constructed Robert Street was supposed to bring in new business, and Meisinger claimed during the Town Square TV candidate forum that it hasn’t: “The new road didn’t attract any new businesses in the last 18 months.”

So which is it? His overall message seems to be not enough economic development, so I guess we’ll stick with his first statement.

Back in 2014, Meisinger claimed the mayor’s office by stoking discontent over the Robert Street project. But he didn’t offer another solution. When pushed to do so, he finally admitted, “I support the rebuild of Robert St less the center median and less the trees every 50 feet.”

So Meisinger’s plan to save money on Robert Street:

The medians were a requirement of an $8 million federal grant. The medians themselves cost about $1.8 million, so the medians actually saved West St. Paul $6.2 million.

When I asked the city for a ballpark cost on the trees, they said $550,000 (and that wasn’t just the trees, it was all plants, tree grates, soil, etc.—but good enough).

Meisinger’s plan would have saved $550,000 on trees (and lose all the economic benefits of trees) and saved $1.8 million on the medians, but that would have resulted in a net $5.65 increase for West St. Paul

During the same forum, Meisinger also tried to smear Mayor Halverson’s record, claiming that economic development has been hampered because the mayor missed so many Economic Development Authority (EDA) meetings.

Speaking of missed meetings, Meisinger skipped out on both ward 3 forums and the Optimist’s Club forum—basically all the opportunities to take questions from the public in front of a crowd.

This is the response he gave for missing the Oct. 15 Women of West St. Paul Ward 3 forum:

“Please ensure to inform the crowd that you could not accommodate my schedule conflict nor that you could take me up on my invite to relocate the debate to my residence to make it happen on the scheduled date and time.”

The South West Review reported that Meisinger took issue with the statement as read at the forum:

“In order to accommodate the original scheduled debate date I offered to have it at my house. Since it was just being taped for Facebook, I presumed that it could be done anywhere outside City Hall, but that offer was declined. I did ask to have it rescheduled to a different date, but that was declined as well. Which I found interesting since the mayor candidate forum was rescheduled to accommodate Dave Napier’s conflict from the original schedule date.”

The South West Review notes that the mayoral forum was held by a different organization, the League of Women Voters Dakota County. That event was rescheduled because Town Square TV would not broadcast a forum with a single candidate. They rescheduled to ensure it would be televised. The WoW forum was not being broadcast by Town Square TV, and WoW has previously held a forum with only one candidate and didn’t reschedule.

Meisinger bullies, he lies, he distorts. Is this the kind of “professional, experienced leadership” we want for West St. Paul?

I can’t say this enough. This is not the kind of person who should ever serve in public office. Vote on November 6 (or early). Talk to your neighbors. Make sure people know who Meisinger really is. And vote for Wendy Berry.

The West St. Paul city website has details on where and how to vote.

For more answers from the Ward 3 candidates (by which I mean Berry), check out these Q&As and forums:

(Full disclosure: I have donated to the campaign of Wendy Berry.)