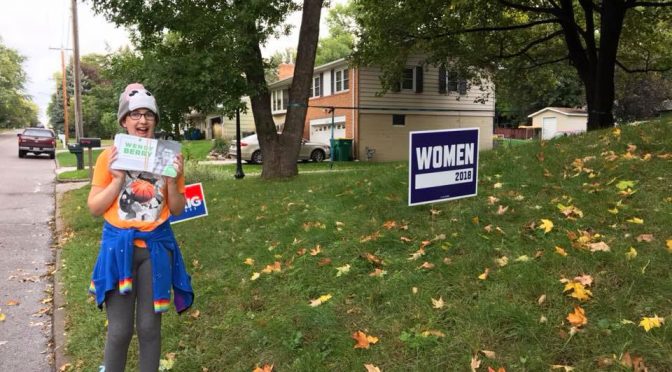 I had opinions. But that’s about as far as it went.

I don’t say any of that to brag. If for some reason it sounds like bragging, it’s actually incredibly easy. I’ve had candidates for governor and Congress call me—all I did was ask questions.

I say all this because I want you to understand that getting involved is not that hard.

I’ve been politically vocal in the past. Though it mostly involved blogging and tweeting. And I said some stupid things that I regret.

So that made me cautious. I wanted to find common ground with people and I didn’t want to be incredibly divisive.

Defending or dismissing gross and unethical behavior in order to maintain political power is simply wrong.

And I’ve realized that I can’t just sit quietly on the sidelines.

I’ve also realized that sitting loud and obnoxious on the sidelines isn’t any good either.

So I got involved.

I went to meetings. I talked to people. I asked questions. I volunteered.

Change Is Gradual and You Don’t Always Win

As I did all of those things this summer as we approached the primary, a dreadful realization dawned on me.

What if we lose?

Losing was a very real possibility.

I wondered how I’d feel about all the time and effort I put into campaigning if my candidate lost.

How dumb would I feel if I wasted all that time?

In the moment, I soberly considered it. Then I decided I’d rather be all in for a candidate I’m excited about, and whatever happens, happens.

And we did lose.

Well, we split the difference: One candidate lost and the other won.

But really, it was a win all the way around.

In the city council race, my candidate—Wendy Berry—won. She led the four-way race and now moves on to the general election so we can do it again. That felt pretty good.

But rather than feel like I wasted my time on Erin Murphy, I’m proud. I’m proud of the race she ran and the person she is. I’ve still got my yard sign and I’m going to hang it on my garage wall for posterity (between a Mad Max movie poster and a Black Lives Matter protest sign).

The #PoliticsOfJoy that Erin (both Erins) embodied is something that will live on.

Now I understand why people still have Bernie Sanders signs and stickers.

The Politics I Want

I’m still leery of being divisive. I don’t want to be another partisan who contributes to the gridlock.

But that doesn’t mean I can’t have an opinion and express it.

It’s why I try to be fair in my arguments, statements, questions, and actions. I’ve written critically about candidates—very critically in some cases—but I think I’ve also been fair.

Lying, misleading, obfuscating, exaggerating—I don’t have time for that crap.

Politics can be a messy and frustrating business. There are often complex issues and powerful emotions involved. Sometimes it can be impossible to get to the truth of an issue.

But most of the time I think we can respect differing viewpoints and respect one another. Most of the time the “other side” is not inherently evil. If you want to accomplish something, you can’t demonize everyone who disagrees with you. In fact, I think we can find a way to disagree without coming to blows (I think we have to). (Though some in my town seem to be working toward the opposite.)

It’s always easier to talk about and harder to do, but I think it’s the goal. And in general, I think people respond to that.

Door knocking always terrified me. But once I got out there and did it (with my daughter in tow—she made me practice as we walked between houses), I found myself energized by talking to people. Having conversations and asking people what they cared about, sharing my perspective and why I liked a candidate—that somehow made politics more personal.

I don’t know if it will make a difference.

But I’d rather try. I’d rather do my part to make things better than sit around and complain.

And you know what? It’s easier than I thought.

You Can Get Active Too

The mid-terms are coming. It’s not too late to go door knocking for the first time. Or phone banking or donating or calling a friend—whatever you’re willing to do.

Let’s not be people who sit around and complain all the time, feeling despondent and hopeless.

Yeah, I get that you’re busy. I am too. Somehow I found the time.

So do what you can. Help make a difference. Do your part in this moment.

2 thoughts on “I Never Door Knocked Before 2018: Getting Involved Politically”