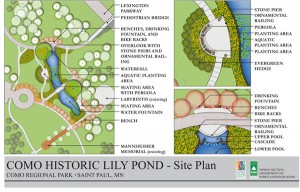 The City of Saint Paul has secured Arts and Cultural Heritage Legacy Funding to restore the Como Park Lily Pond. The pond last held lily pads in 1926 and has mostly been an empty concrete pond since. The 1903 fieldstone and concrete bridge will get some repairs and a new railing. The pond walls and bottom will be completely replaced, though it will have the same footprint and use fieldstones across the top like it currently has. The north pool will feature a water cascade and there will be a fountain in the south pool, both to help circulate water. The pond will feature native aquatic plants, so no more heating the pond and bringing in giant, exotic lily pads. There will also be a seating area north of the pond and another to the west with a pergola.

No completion date has been given, but the project appears to already be underway.

The Lily Pond has always been one of my favorite spaces in that grand public park. There’s an intense feeling of history there that’s hard to escape and it’s a fun place to wander around. I’m curious how that will translate with all the renovations. I’m excited that they’re doing something with the old Lily Pond, but part of me also wonders if it’ll still be the old Lily Pond. Part of its appeal was that it was empty and neglected, an odd pond with no particular use. Hopefully the restored pond will capture that sense of history that made it so great. The Lily Pond was built in 1895. The original wooden bridge was replaced in 1903 with the current fieldstone and concrete bridge. You can easily find postcards from the early Twentieth Century featuring the Lily Pond with an assortment of people in their finest clothes taking in the Victorian water lilies and the flagstone path around the pond, both of which are gone today. The lilies were removed in 1926 when the area became too shady for the lilies to flourish and the pond was soon drained.

That was more than 80 years ago and it doesn’t seem that the pond has changed much since. Its surroundings certainly have, especially lately with the 2005 addition of the Global Harmony Labyrinth and the removal of Kauffman Drive in 2007.

And still the Lily Pond sits there, which is really an anachronistic name since there are no longer lilies or a pond. There’s just an ancient bridge, a concrete floor, stone walls and random pipe remains. It’s peaceful and quiet, but echoes with the past.

Word is that Como Park hopes to someday restore the pond, though they haven’t found the funding to do it.