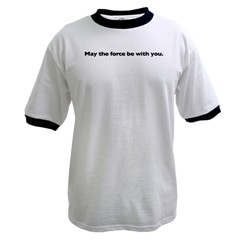 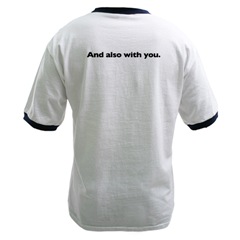 In honor of the final installment of the Star Wars double trilogy, Episode III: Revenge of the Sith, I present a fancy new T-shirt. It’s a white “ringer” T-shirt with a black band on the edge of the sleeves and collar (or I suppose you could get blue or orange, but that’d look stupid).

The front says: May the force be with you.

The back says: And also with you.

And I mean that. The article the other day about T-shirt sales inspired me, and I’m thinking of doing a T-shirt a month–but only one per month. Come the end of the month we’ll switch to something new, so you snooze, you lose. No more hilarious Star Wars T-shirt. It’s a goofy plan which fits nicely with Cafepress’s requirement that basic shops can only sell one of each item. And it’s more fun that way. Means I have to come up with a new geeky T-shirt every month.

I’ll vouch that Cafepress T-shirts are pretty nice. They need a wash after you first get them, but they hold up pretty well. And if you look around on the net, sometimes you can find Cafepress coupons (Shh… don’t tell).

Update: Caving to pressure, I’ve dropped the price to $15.99, though I doubt that’s going to appease either complaintant. Sorry folks, print on-demand T-shirts ain’t cheap. At this price I’m making $1 per shirt, which is probably fair considering the work I put in to it. The other option would be to have everyone order shirts and at the end of the month I’ll put in the order, print them and distribute them. But that requires work. And somehow I can’t see many of you being interested in that. But maybe you would be. The price could probably drop signifcantly. Comment away if you’d be interested in that system.

Though as I told someone today, I’m not trying to get into the T-shirt business.