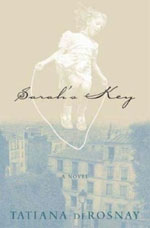 Sarah’s Key by Tatiana de Rosnay explores the Vel’ d’Hiv’ tragedy during World War II when French Jews were rounded up and ultimately sent to the death camps. It was by order of the German occupation, but carried out by French authorities.

The story is told from the perspective of a young girl rounded up with her family and also a middle age woman in 2003 researching the story as a journalist when she uncovers a personal family connection.

It’s a compelling story and engaging as the mystery unfolds, but I wasn’t completely engaged or rooting for the characters. Part of it is the intense nature of the Holocaust, but something about the disconnected French characters and the way the girl’s story eventually fell out of the narrative left me wanting something more.

But it is an educational moment, exploring the French complicity (and later guilt) and an element of the Holocaust I’d never heard about before.