The news coming out of Sudan has been a bit bizarre this week as the International Criminal Court issued an arrest warrant for Sudanese President Omar al Bashir on charges of war crimes. It’s the first time a warrant has been issued for a sitting head of state. In response, Sudan has been kicking international aid groups out of the country, threatening even more of the mess that Bashir is charged with in the first place.

What’s been especially interesting is the reaction of Franklin Graham, son of Billy Graham, head of the Billy Graham Evangelistic Association and the international aid organization, Samaritan’s Purse. Graham wrote a New York Times op-ed piece arguing that Bashir should be left in power in order to maintain peace in Sudan.

So what’s more important? Peace or justice? It seems like a damned if you do, damned if you don’t situation to me. There may be peace right now, but it’s being held together by a tyrant accused of war crimes. But bringing justice means more unrest, hardship and possibly death.

It reminds me of the situation in Iraq (if you ignore the whole weapons of mass destruction thing). Do you leave a murderous tyrant in charge or oust him and risk the messy aftermath?

Seems to me that real, lasting peace only comes when justice is ensured. But it’s never an easy process. Especially when different people have different ideas of what constitutes justice. Getting along with people (never mind entire countries of people) is no easy thing.

We’ve got friends who are currently in Khartoum, which makes this whole thing a lot more personal. We also had the option of a fuel layover in Khartoum on our way to Ethiopia (we opted not to take that route). Makes the world feel a lot smaller. 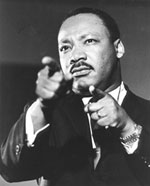 Last week I talked a bit about Martin Luther King Jr. being a radical. Today it seems appropriate to look at some of his radical words.

On love vs. hate:

“I have decided to stick with love. Hate is too great a burden to bear.”

“Nonviolence is the answer to the crucial political and moral questions of our time: the need for man to overcome oppression and violence without resorting to oppression and violence. Man must evolve for all human conflict a method which rejects revenge, aggression and retaliation. The foundation of such a method is love.” (Nobel Prize acceptance speech, 1964)

END_OF_DOCUMENT_TOKEN_TO_BE_REPLACED

Yesterday President George W. Bush laid a wreath at the tomb of Dr. Martin Luther King Jr. on what would have been his 75th birthday while protesters chanted in the distance.

Many protesters accused Bush of staging a photo opportunity, citing King’s non-violent stance. The image of a president leading a divided country into a questionable war standing at the grave of a man who gave his life for peace seems a bit disjointed.

In a twist of history, city buses were used to block any view between the protesters and the president.

So war broke out. It took me an extra half-hour to get home on the bus today, thanks to the protesters in downtown Minneapolis. Hurrah to your anti-war efforts, you inconvenienced a few thousand poor schmucks. I hope that helps your cause. You could certainly use some help. Someone ought to explain to the poor fools in San Francisco that when you’re arguing for peace, violence is not a very persuasive tool.

Extreme nutcases aside, I’m having trouble understanding the anti-war movement. Now I’m not a pro-military guy. You’ve probably noticed the big feature on the book Iraq Under Siege on the ReALMagazine.com homepage. I wrote that. It’s a bit out of date now, but it’s still interesting. I read the book with some skepticism, but came out with a lot of questions about U.S. policy. Granted Saddam is not a great guy, but we’re no Ghandi.

I have my reservations with war. My selective service card is tucked away somewhere, and if that number was ever called up, I don’t know what I’d do. I would have trouble shooting at my fellow man. My grandpa fought at Iwo Jima, and I respect his sacrifice, but I still approach war with fear, hesitation, and questions, much to the irritation of my own dad.

But despite my aversion to war, I’m just as put off by the anti-war demonstrators. Their complete lack of logic, balance, and inability to present a decent argument are astounding. I can see a legitimate anti-war platform, but I’ve yet to see a protester argue that platform.

They spout off rhetoric about Bush trying to rule the world, trying to run a race war in the Middle East, trying to claim all the oil in Iraq. What a load of crap. The only argument there that has any validity is that the war has to do with oil. It’s fairly legit to think that oil is a motivation. But if Bush was really oil hungry, would he really be promising to use the oil for the Iraqis, to let them have what’s theirs. If it was really about oil, we’d be seizing the oil fields, selling the oil, and paying for our war. But that doesn’t seem to be what’s happening. If anything, oil is a way to pay for rebuilding the damage a war has caused and a way to get a liberated people back on their feet, a motivation that doesn’t exactly exist in a place like Sudan.

Many people are arguing that we shouldn’t be fighting this war because we don’t have international consensus. That’s a decent argument–though I don’t see any protesters chanting about that. The problem with international consensus is that it’s rare. This conflict has dragged on for a long time, and at some point you have to draw the line.

War is not a pretty thing, but it’s inevitable. That doesn’t mean we have to like it or even pursue it, but it does mean that it’s going to happen. We can do everything we can to avoid it, but it will happen. Especially if you value freedom, war is necessary. So many people find it ironic that war is what enables the protesters to protest war. Without the American Revolution, we wouldn’t have the first amendment that gives us the right to petition our government. Without World War II, we might be under Nazi rule. And I don’t think fascism looks too kindly on a ‘puke-in.’

There’s a lot of tough questions the anti-war movement needs to address, and I see very few addressing it. What about Hitler? They tried diplomacy with Hitler and he invaded Poland. What about the terrible things Saddam has done? Do we just ignore those? True, we ignore other terrible things around the world and we end up enforcing justice inconsistently. I agree. But is it better to stop the one massacre you can than to let it happen? True, we often make big mistakes, like selling someone like Saddam chemical weapons. I think we should fess up to them and try to make smarter decisions in the future. U.S foreign policy is fraught with some big blunders. I’m the first to point those out. They make me nervous. But sometimes those blunders were an attempt to keep something worse from happening. Sometimes it works, sometimes it doesn’t. Meddling in El Salvador didn’t come off too well. But taking out the Taliban in Afghanistan seems like a no-brainer.

Sometimes I just wish America would be the world’s police and do it right. Stop the bloodshed in Rwanda and Sudan. End the guerrilla fighting and drug wars in Columbia. But it’s not that simple. I wish it was.

True Christian pacifism is an interesting idea. Jesus talked about peace, and so some Christians think that’s the way to go. The Ghandi, Martin Luther King, Jr. approach that turns the other cheek. You love your enemies, and that doesn’t happen with smart bombs. It’s a great personal philosophy, but I get squeamish when you have to think about nations. I can decide to be non-violent, and take a punch in the gut when it happens. But when it comes to a nation, if you don’t defend yourself, innocent people die. If a nation turns the other cheek, trades flowers for bullets, eats pastries for peace, you have no more freedom. You become a country in occupation. Maybe that’s okay for some people. It works for Switzerland. But I have a feeling most of us freedom-loving Americans would be shot by the invading army pretty quickly. We’d want to speak out, to say what we want, do what we want, and they’d kill you. That’s what turning the other cheek gets you. Loving your enemies is not compatible with freedom. You have to fight for freedom in this world. We can have freedom in Christ, but it’s more of a personal commodity that bears fruit on the other side.

So I’m not liking the anti-war protesters. I sympathize with them, but I wish they’d make some decent arguments. I wish they’d address the real issues. This world is a complicated place, and it doesn’t work to just say can’t we all get along. Because some jerk comes along who doesn’t want to get along, and pretty soon people are dead. You can either stand up and make sure that innocent people don’t die, or you can hold up your hands and be willing to die along with them. On a personal level, one sounds a lot like Jesus. But nations are different, and I’ve never seen that kind of a Christian nation.

It would be interesting to see America the Christian nation, as in the country that makes every effort to be Christ-like, even in the way we wage war (can there be a Christian way to wage war?). But maybe that’s what we’re doing. A “smart bomb” that lands on target more often than a conventional bomb and hopefully destroys the military target more often that it destroys a civilian target seems like a humane advancement. Moving in with humanitarian supplies seems like a Christ-like move.

Maybe it would help if our government made better choices across the board. If we got tough with countries like China that don’t offer freedom of religion. If we stuck up for the fatherless, the widow, and the orphan all across the globe. The prophet cried out for justice to flow down like a mighty water, and maybe that can’t happen until God steps down onto this earth, but aren’t we called to bring justice now, in whatever way we can? We’re certainly not God’s henchmen, and we shouldn’t claim to be, but some things are pretty clear cut. Mowing down your own people is not justice, and that’s a worthy fight.

Oh, the rambling. Sometimes I find myself easily swayed by arguments. Last week I was angry when someone was so incredibly Republican that they refused to see the duplicity in American foreign policy. I don’t like war hawks. But this week I’m angry at the protesters who don’t see the necessity of war in a modern world. There’s a shaky middle ground somewhere, and that’s where I find myself. Raising a flag for peace is a lovely gesture, but it’s also an idealistic one.