It’s New Year’s Eve and nobody’s really working today, so it’s time for a little 2010 recap. Thankfully my wife did a full recap in photos, so I can skimp a little.

Bigger Family
The biggest moment, of course, was welcoming a preteen into our family, along with all the Hannah Montana and Justin Bieber and sparkly pink that comes with a pre-teen. It’s been quite a ride with Yeshumnesh and we’ve got a ways to go. I’ve never felt so old—and at the same time so young. I did manage to welcome Yeshumnesh into our family with a new haircut. First time in three years I paid for one. The mohawk made our Christmas card.

Addition by Adoption, is my book of tweets about raising kids and bringing Milo home from Ethiopia. A portion of the proceeds go to clean water in Ethiopia, and in September we hit the $5,000 mark and raised enough to build a well in Ethiopia. The book is also just barely turning a profit, which is exciting.

Then there’s Open Our Eyes, the book that supports homeless advocate Mark Horvath. If you want to know more about what Mark does, read Ka’e k’e‘s story. It’s been a big year for Mark. We also helped him win $50,000. The book has all kinds of big names contributors, like New York Times best-selling author Chris Brogan. All profits from the book go to support Mark’s work with InvisiblePeople.tv. The profits aren’t much—I send Mark his first payment yesterday ($226.56), but he won’t be retiring any time soon. Knowing Mark he’ll be spending it on someone else.

For all the writing success, I also had a big failure. My fourth attempt at National Novel Writing Month fell flat. I gave up after two weeks when the story wasn’t coming together and I realized my life was too busy.

Giving Back
With building a well in Ethiopia and publishing a book to fight homelessness I’ve done a lot of giving back this year. But it started even earlier when we responded to an earthquake by coloring. Lexi’s pictures ended up raising $675 for Haiti. Other folks got in on the action about the time the idea fizzled out. I’d love to do more with it, but I think I have enough charity cases on my hand.

I’ve been thinking about novel writing lately. You can blame Jonathan Blundell and the little video chat we did a few days ago about my post-apocalyptic sci-fi novel, Least of These. You see, I’ve written three novels. Two have been self-published as rough drafts and one has seen a few re-writes and I’m wondering what to do with it.

Last night I pulled out my non-sci-fi novels and started reading through the first chapters. I liked what I read. I saw a few things here and there to improve (I’ll probably always feel that way), but I didn’t have that impending sense of way too much work to do to find anything salvageable. I enjoyed what I read, perhaps out of nostalgia for my own creation, but I also thought it was pretty good.

But the question I kept coming back to is what do I do with these novels?

END_OF_DOCUMENT_TOKEN_TO_BE_REPLACED

You may remember that I recently published a book. It’s a little sci-fi post-apocalyptic novel called Least of These with a killer cover (you can download a free copy or buy the paperback for $9.99).

Yesterday I sat down and did a little video chat about the book with one of my readers, Jonathan Blundell (my one reader?). Jonathan has been very supportive of my work (and I’m supportive of his work) and it was fun to talk over some of the ideas in the book and how the book came together.

So if you’re looking for the inside scoop on Least of These—how inspiration came from U2 and Buffy the Vampire Slayer, how my wife refuses to read it, my take on standard post-apocalyptic plot lines, why it has such an awesome cover—check out the video chat. I even do a little impromptu reading.

For a special bonus, count how many times I say ‘um.’

Get your copy of Least of These now.

There I am, sitting in my grandmother’s rocking chair reading the first chapter from my novel, Least of These. It’s kind of like attending an author reading at your favorite bookstore, except you can be in your house and I can be in my house and nobody pays  me to record audiobooks for a reason. But it’s still pretty cool.

You can buy a copy from Amazon if you like. A few friends have also created e-versions from the free PDF (iPhone and ePub, I think), but I haven’t gotten around to posting them. If you’re clamoring for those, hit me up in the comments I’ll stop procrastinating.

And for the record, I noticed one error and a handful of corrections I wanted to make after reading the first chapter outloud four or five times. I told you it was a rough draft. 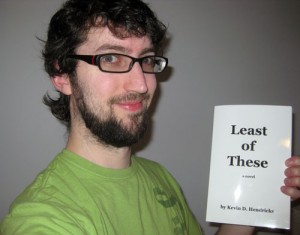 Yesterday I announced that I had finished writing my 2008 National Novel Writing Month effort, a post-apocalyptic sci-fi novel called The Least. This was my third attempt at writing a 50,000-word novel in 30 days (that’s 1,667 words per day). While I’m definitely a winner because I finished (that’s all that matters with NaNoWriMo), The Least is definitely my worst novel by far. I did learn a lot in the process though.

1. Sci-Fi is Hard
I knew it would be, but science fiction is an especially hard genre to write, especially in 30 days. The biggest hurtle is that you have to create an entire fictional world. If you pick a contemporary setting, you don’t have to wonder what kind of clothes people will wear or how they find food. I knew this would be a problem and ended up deciding a few things and running with them, even after I realized some of my assumptions wouldn’t hold up. I love the thought process and imagination involved, but you end up putting a lot of effort into the setting and it’s easy to neglect the plot or characters.

END_OF_DOCUMENT_TOKEN_TO_BE_REPLACED

I finished. I just crossed the 50,000-word mark, wrapped up my epilogue and stuck a fork in The Least, my 2008 National Novel Writing Month novel.

It was quite a sprint at the end, when I wrote more than 6,500 words in one day to overcome loses from the holiday and travel but then just kept on going to finish a day early.

The novel itself isn’t spectacular. Few NaNoWriMo novels are, but this one by far has more glaring holes and painful moments than my previous efforts. But that’s OK. That’s not what’s important. Just doing it is important, and I did it. Now I can call myself a Sci-Fi novelist.

You can read it if you like, though I’m not really recommending that.

For those who don’t remember or haven’t been paying attention, I’m participating in my third National Novel Writing Month right now. That’s when I consume massive amounts of chocolate and caffeine and write a 50,000-word novel in 30 days. After 20 days I’m over 34,000 words. That means I’m ahead of schedule, but not by much.

You can read along if you like, though I promise it’s full of typos, bad ideas, moralizing and inconsistencies (hey, it’s an unedited first draft).

END_OF_DOCUMENT_TOKEN_TO_BE_REPLACED

Oh yeah, I started writing a novel today. Again. It’s called The Least (it’s a working title, I know, I’m not thrilled with it either). This is the third time I’m participating in National Novel Writing Month, the pressure-cooker event where you attempt to write a 50,000 word novel in 30 days. In both previous attempts I won (i.e., finished).

So far I’m at 3,832 words, which puts me well ahead of schedule for the first day (woot, woot!). I find it really helps to start strong. It gives you a needed cushion for days when the words just don’t come. To save you the math, you have to write 1,667 words per day to stay on track.

And you can read along. I just set up a quick Blogspot blog where I’ll be posting the novel as I go. It will be full of typos, plot holes and it might completely suck, so reader be warned. It’s also a work of post-apocalyptic fiction, so abandon all hope ye who enter.

Hopefully it will be interesting and fun. I’d appreciate your comments and support, as long as they’re all positive (if you think my novel sucks, don’t tell me until December).