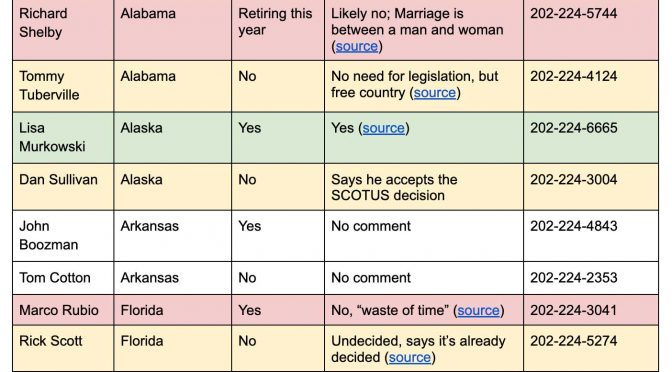 Nov. 15, 2022 Update: It looks like the Senate will pass a slightly watered-down version of the Respect for Marriage Act as early as tomorrow. About damn time.

In a total shocker, last week the U.S. House passed the Respect for Marriage Act, which protects same-sex marriage, on a bipartisan vote. Roughly a quarter of the Republicans joined all Democrats to pass the bill. Next up is the Senate where the bill needs to get 10 Republicans to pass. So we have work to do.

What do we do?

Anyone who values freedom, supporting the LGBTQ+ community, and civil rights should be interested in persuading senators to support the bill. This kind of advocacy has worked in the past (remember protecting the Affordable Care Act in 2017?) and we can do it again with the right organization.

What can I practically do?

I created a Google Doc listing all Republican senators and where they stand on the bill. Currently we have five yes’s and a lot of undecideds and no comments. So these senators need to hear from their constituents.

I’ve also listed states they represent, phone numbers, and who is up for reelection. Give ’em a call. Ideally, call your own senator. If your own senator isn’t on the list, find friends or family in those states and encourage them to call. Feel free to share the Google Doc directly. Here’s a short link: https://bit.ly/3vdBqBo

I know, it’s not my favorite thing to do either. But it’s easy. You can do it in two minutes. If you don’t like talking to people, call after hours and you can usually leave a message. If you really hate calling, visit their website and fill out a contact form/email, though generally phone calls are more effective.

I put more details in the Google Doc about what the Respect for Marriage Act is and what it does, how it’s not perfect, why it matters to push for it, etc. I won’t get into all that here.

But I will say a word about why this is important to me.

We had a civil rights movement in this country, and while it made incredible strides, there’s still work to do. Today some people still deny racism exists, refuse to accept how systemic racism happens today, and are trying to remove discussions of racism from how we teach history. It’s madness. And that’s just the fight we’re having over racism.

Civil rights for the LGBTQ+ community is a newer fight with newer and less sure safeguards. It was only in 2015 that gay marriage became the law of the land thanks to the Supreme Court. As we’ve see with Roe, that can change. We’ve already seen attacks on libraries and schools over whether or not they can acknowledge gay people. Our trans friends and family are especially at risk.

Some people are desperate to protect their ability to discriminate.

That’s bigotry, and I won’t stand for it.

As a hyper-local journalist, I consider this issue to be a basic tenet of human rights. There are not “two sides” to human rights.

Of all the things we can do, this one is a winnable fight. I don’t know about you, but I could use a win. It’s certainly not the end of the fight, but it’s one we absolutely need to be in.

On a more personal note, I have friends and family who are gay—like many (all) of you. No one should have to worry about the legitimacy of their family. Not just their marriage, but their family. Their kids. While some Republican senators say nobody is trying to overturn gay marriage, that’s not true. They are coming for these families. And that’s some bullshit.

So not knowing what else to do and not seeing anyone else doing it, I did a thing. Tell your friends and family. Call your senators. Let’s protect gay marriage.