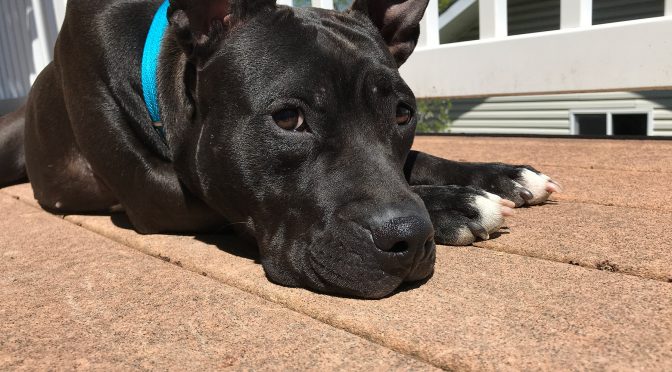 Kat is a funny story because the entire family ganged up on me and had been campaigning for more dogs for a while. After Nick, things kicked into high gear.

It’s not that I dislike dogs, but I’m not a dog person. I also recognize that I’m the one who ends up doing much of the work of having a dog. It didn’t help that Nick was so thoroughly attached to Abby that he really didn’t care about anyone else. Sure, if I was the only one around he’d look my way for attention, but what he really wanted was Abby—wait, is that the garage door? Is she home now? You non-Abby person, you are dead to me.

We’ve also had the season of the geriatric dog. And Nick, well, he wasn’t geriatric, so I don’t know what his excuse was, but I was pretty tired of cleaning up dog stuff in the house.

So I was not excited about getting a new dog.

But I was out-numbered, out-manned, out-gunned. I was powerless to stop it.

And when we first went to get Kat, I wasn’t too thrilled. I’ve never liked big dogs. They always jump on me and I hate that. I told Abby my one rule was that we can’t get a dog big enough to eat me. Granted any dog will eat you, but the small ones would wait until you fall down the stairs and become incapacitated before seeing you as a snack to feast on over several days. A big dog doesn’t have to wait for your inevitable downfall.

So when we saw Kat, I thought, she’s a big dog.

She’s really not. She weighs 40 or 45 pounds. But there’s a big difference between that and the 20-pound tank that was Mazie and the 15 pounds of fluff that was Nick and the 6 pounds of Speak. While Abby filled out the paperwork, the kids and I walked Kat around the park. Her incessant and mighty tugs on the leash were not filling me with confidence. But we’d come too far for me to wimp out now.

So Kat came home with us. I wasn’t the only one a little uncertain. Mazie never warmed up to her. Kat just learned to stay out of Mazie’s way.

But Kat did manage to convert me.

It started when she somehow managed to climb into my lap in our living room chair. That doesn’t sound like much, but you have to remember she only has one back leg. And this is one of those more formal chairs, not like a lazy boy the dog can just leap into. Kat decided she was a lap dog and just sort of pulled herself into my lap.

She’s wiggled her way into my heart. I think she realized that I’m the one she had to win over to cement her place here. Not that I could have sent her away, but she had to do something to make this a really happy home and not have that resentful and slightly grumpy dad always looking at her and shaking his head.

Now the kids make fun of me, reminding me how adamant I was that we not get another dog.

And Kat can be a handful sometimes. She does like to jump in people’s faces, and when she gets wound up, she gets wound up. I’m still the one who takes her for a walk most of the time. But I just tell myself I need the exercise too, so she’s a helpful incentive to get me out the door.

A lot of people have their own pandemic pet, and while I didn’t think that was a good idea, Kat did a pretty good job convincing me.