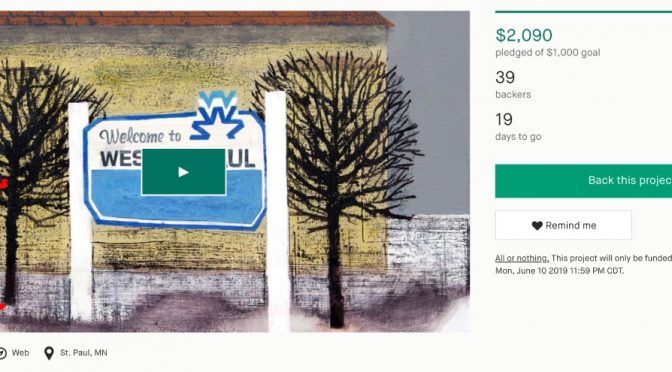 I’m super grateful for all the people who have stepped up to help this project. It’s so encouraging to see this kind of support.

But it’s not over.

Let’s talk about why you should support it.

First up, let’s talk about what you can get out of the deal—the rewards. One of the fun things about any Kickstarter project is all the creative rewards you get for backing the project.

This one is a little different because the campaign is to start a website, so there’s not a product you get as a reward. Everyone gets the rewards of the site being live. But we’ve still got some fun rewards that can make it worth your while:

While rewards are great, I think the bigger picture angle of offering hyperlocal news is worth considering.

Writing about my community is something that excites me. I’ve been doing it for five years now, slowly getting closer and closer to the idea of launching a dedicated site.

Why a West St. Paul Site?

I kept rejecting the idea of a West St. Paul blog, deciding I didn’t want to commit to another time suck. But as time went on and I kept writing about West St. Paul more and more on my personal blog, I couldn’t get away from this idea.

Let’s face it: It’s hard to know what’s going on in your community.

We’re a town of 20,000 people in a metro area of more than 3 million. Local media doesn’t pay much attention to us. And why should they? If you want to know who’s running for city council or why some road construction project is a big deal, it was really hard to find answers.

West St. Paul has an incredibly active Facebook group, but for all the benefit it brings, it’s often full of so much snark and noise that it’s hard to get straight answers.

So there’s interest, and there’s need, and I’ve got the passion.

The Benefit of Hyperlocal

Being informed, engaged, connected—that all creates a sense of pride in your community. You feel like you belong.

That’s definitely the spirit of West St. Paul, but it’s been so much stronger lately when people have been learning about what’s going on, engaging in volunteer and community efforts, and connecting with each other.

Just ask how many people have attended city council meetings for the first time in the past year.

So what stories are we telling? West St. Paul Reader has been live for 10 days, but here are some of the local stories we’ve already told:

It’s been fun sharing these stories, and we’re just getting started.

But to keep it up, we need support. Please support the Kickstarter campaign, get some of those great rewards, and enable this hyperlocal effort to keep going.

Our next stretch goal is for guest columnists (because this project should be more than me). As of right now, we need another $910 to hit that goal. It’s a big ask, and definitely a stretch, but I think we can do it. We’ve got 17 more days to go.

Thanks to everyone who has made this happen.