The number one misconception about the Robert Street tunnel is that it’s going to cost West St. Paul too much money. A citizen comment at the Feb. 27 city council meeting urged the council to be fiscally responsible and reject the tunnel. But this is often based on earlier reports about the tunnel that had a higher price tag and no secured funding.

The latest report on the tunnel—released in December 2016—has a lower price tag and secured funding. There are three options for the tunnel, ranging from $2 million to $3.2 million. A total of $2.85 million in funding is already secured (which fully funds two of the three tunnel options), plus 75% of acquisition costs.

The Robert Street tunnel is actually the fiscally responsible choice for West St. Paul. It brings investment and value to our city at little or no cost.

2. No One Will Go Out of Their Way to Use a Single Crossing

Planning commission member John Ramsay argued in a recent meeting that  “people would not walk the entire length of Robert St. to cross at the tunnel.” (Source: Jan. 17 Planning Commission meeting minutes)

No, they won’t. And that’s not the purpose of the tunnel.

It’s not intended simply for pedestrians to get across Robert Street. If you’re a pedestrian trying to get from the 5-8 Grill to Target or Jimmy John’s to LA Fitness or the post office to Ali Baba’s King of Gyros, you wouldn’t use the Robert Street tunnel. That’s why we have crosswalks.

The purpose of the Robert Street tunnel is to allow the increased pedestrian and bike traffic of a regional trail (a projected 140,000 uses per year) to cross Robert Street in a safe and efficient manner, while also providing a better trail experience.

It’s about getting from Thompson Park to Dodge Nature Center or doing a 14-mile loop or going from Garlough Elementary School to the library.

The Robert Street tunnel is all about that regional trail experience, not local foot traffic. 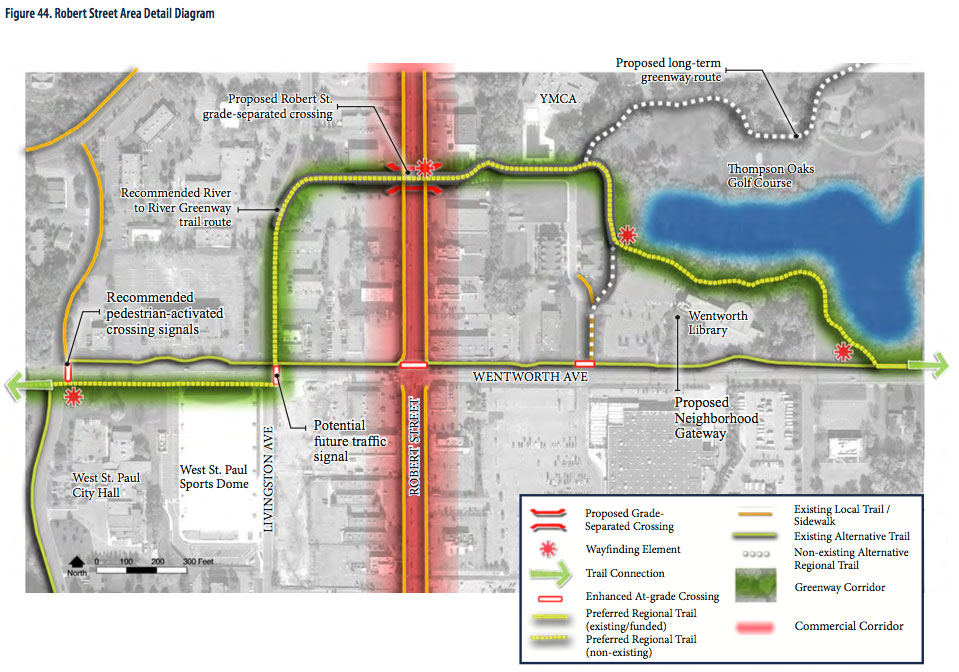 3. All Crossings Should Be Safe

Council member John Bellows has argued that any crossing of Robert Street should be safe and we shouldn’t focus so much energy on creating just one safe point to cross. (Source: 2015 South West Review article, also repeated at January 2017 neighborhood meeting)

Of course all our crossings at Robert Street should be safe, but a regional trail will send a lot more pedestrian and bike traffic to the crossing. That kind of volume should justify a separate crossing. (EDIT: The 140,000 use number is not a count of specific use at one spot, but over the whole trail, so it’s not quite accurate to say we’d see 140,000 crossings at Robert Street. But we would see a marked increase in volume, so I think it’s still a fair point.)

Again, the Robert Street tunnel isn’t simply an alternative to a crosswalk. It’s a regional trail, and that’s something new and different. It’s on another level than a mere crosswalk.

For the sake of comparison, if you look at other major trails in the region, like the celebrated Gateway Trail, they never have an at-grade crossing of a four-lane road. It’s simply not done.

Why? According to the National Highway Traffic Safety Administration, more than half of all bicycle crashes nationwide occur at at-grade street crossings.

So yes, all crosswalks should be safe, but that’s not the issue here. We’re talking about the quality and safety of a regional trail, not just a crosswalk. Why should we make West St. Paul’s regional trail less than ideal?

4. Pick a Trail or Development

Several city council members have implied that we have to choose: Do we want business development, or do we want the regional trail and the Robert Street tunnel?

In a recent Open Council Work Session (meeting minutes), city council member Ed Iago argued that the tunnel could derail potential development of the YMCA property. In the same meeting, council member Bob Pace said the city should ask if residents want a big box development or a tunnel.

But we can have both. Trails and business development can work together. The Midtown Greenway in Minneapolis spurred $200 million in development. Trails also bring money into the community and raise property values.

It’s also a misleading argument because the YMCA hasn’t even committed to selling their property yet. They’re not in the midst of negotiations that a trail could somehow derail. If anything, the trail could be a potential benefit that helps lure development.

So rather than saying West St. Paul needs to pick trails or development, we have an opportunity to choose both and make them work together.

5. The Trail to Nowhere

In that same recent Open Council Work Session (meeting minutes), city council member John Bellows said there were too many unknowns about the trail. He said we have no clue where the path will go to the east on Oakdale and then dubbed it a “trail to nowhere.”

Where Does the Trail Go? 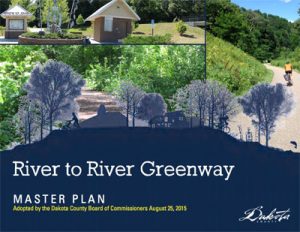 Except that Dakota County released a River-to-River Greenway Master Plan in 2015, a 98-page report that details the entire length of the regional trail, from current conditions to proposed changes.

For example, pages 46-47 explore how the trail will be routed along Oakdale Avenue and potential improvements.

So there are very detailed plans and proposals, much of it simply improving existing paths. 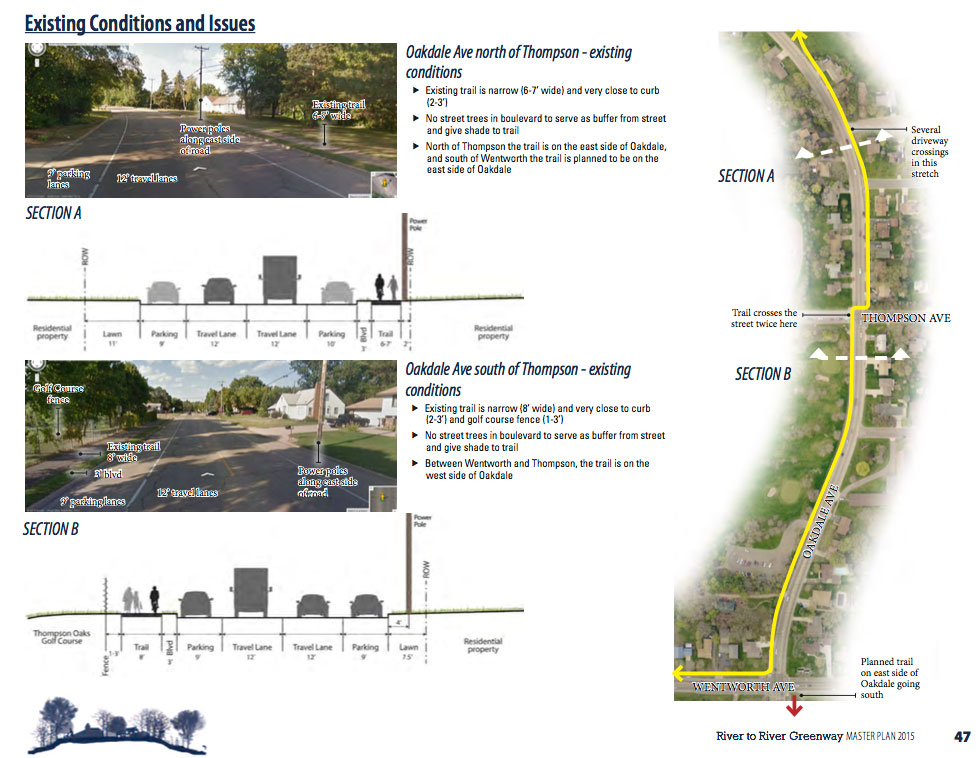 Now yes, some of it is up in the air. Like many things in local government, the plan has to be flexible. For example, there’s an ideal alignment for the trail that would go through the current Thompson Oaks Golf Course. But that can’t happen until the golf course is redeveloped, which the plan notes. Until that happens, there’s a current plan that routes the trail along Wentworth and Oakdale (using existing paths).

But it’s not true to say we don’t know what the plans are.

A Trail to Nowhere?

And it’s definitely not true to say it’s a trail to nowhere. The trail connects to:

This completed trail connection would make West St. Paul part of a massive regional trail system that goes throughout Dakota County and the wider Twin Cities—literally hundreds of miles of trails. It would connect us to the Mississippi National River and Recreation Area, which is a unit of the National Park Service.

That’s hardly a trail to nowhere.

Another question that frequently comes up is the perception of crime.

But West St. Paul Police Chief Bud Shaver has said he’s not concerned about tunnel safety, even at night. Here’s his statement from the South West Review in 2015:

“I do see value in people not having to cross the street,” Shaver said. “The tunnel has its advantages for sure, and I don’t suspect that it would be a spot where individuals would wait and lurk for victims of crimes. There’s no track record of that happening in tunnels in the area; that’s just a perception from TV.”

Shaver did say graffiti and vandalism might be an issue, but he said those are maintenance concerns and not enough of an issue to dismiss the idea of a tunnel.

There are already three tunnels on the River-to-River Greenway trail: under Marie Ave., Charlton and 19th Ave. None have had safety issues.

7. Residents are Opposed to the Tunnel

In a Feb. 1 Environmental Committee meeting (minutes), city council member Bob Pace said his constituents oppose the tunnel 40 to 1. A citizen comment at the Feb. 27 city council meeting also presented a petition with 50 signatures against the tunnel.

Now to be fair, this isn’t exactly a misconception. But I do think it’s worth addressing. How was the Robert Street tunnel presented to those residents? I’d be opposed to the unfunded, $5 million tunnel a presented in a 2015 article. That was likely the information to those opposed to the tunnel.

But it’s not current. When I talked to the citizen who presented the petition, he was not aware of the $2.85 million in secured funding that I outlined above, nor that it fully paid for two of the three tunnel options.

I think it’s likely opposition to the tunnel will change when the facts are clearly presented.

The other reason I have trouble with Pace’s 40 to 1 statement is when I’ve talked to my neighbors and fellow residents, I’ve seen almost the complete opposite. Everyone I talk to thinks it’s a great idea.

In fact, the survey from the city’s neighborhood meetings in January shows strong support for sidewalks and trails. When asked what the city council should focus on, the #1 response was a tie between attracting new businesses and providing more sidewalks and bike trails:

When asked if anything is keeping residents from walking or biking where they want to go, the top answers were lack of sidewalks, lack of bike lanes or trails, and major roads that are too large, busy or fast to cross: 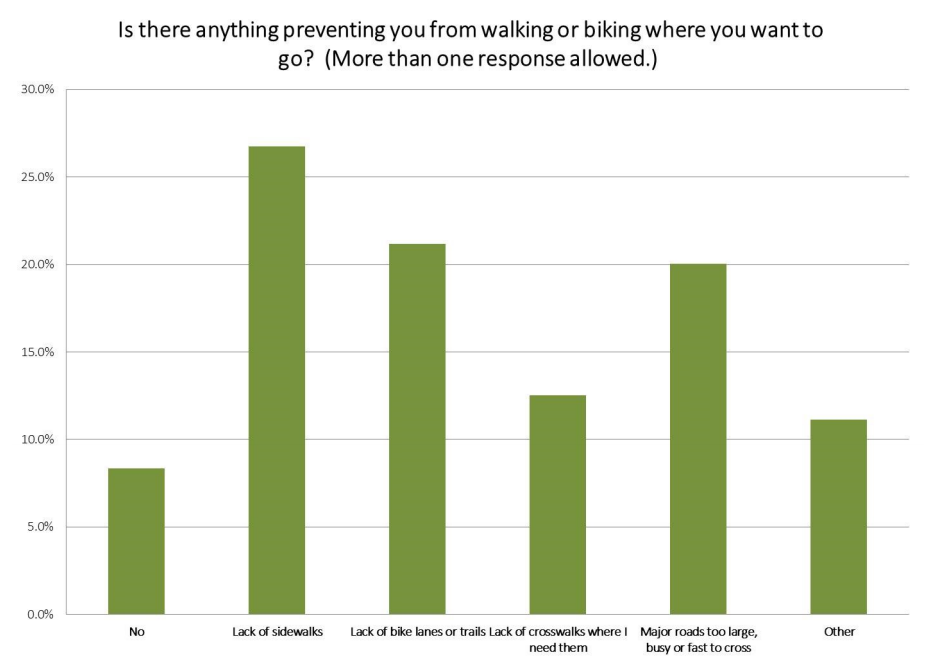 Now maybe Bob Pace and I are just talking to the completely opposite people. In the end, this is something we can’t really argue about. We can simply show wide-spread community support for the Robert Street tunnel and River-to-River Greenway trail.

And showing support for the trail and tunnel is vital. Currently the West St. Paul city council opposes the project 4-2.

So let’s end the misconceptions. Dakota County has lots of information available about this trail and tunnel proposal.

Here are two things you can do right now to show your support:

We also need to have a public meeting. Let’s bring all these facts and questions into the open. Let’s allow the public to make an informed decision and give their input. Then the city council can make their own informed decision, based on accurate information and clear direction from residents.

More on the Robert Street Tunnel:

I’ve had some questions about the 140,000 number I cite above, so I made some edits to reflect that. I’ve been saying 140,000 people will use the trail, and that’s not an accurate reflection of how that number is determined. First of all, it is a projection for 2030, though the current number would be 123,000, so it’s not a huge adjustment.

It’s a standard methodology and the number is actually how many “uses” the trail will see. If I use the trail every day, I’d be counted every day. It also counts in multiple places since most trail uses are fairly short. So it won’t bring in 140,000 different people.

The point of the number is to show that the trail will be used. A lot. I think that’s still a fair point, even if I botched the presentation.

12 thoughts on “7 Misconceptions About the Robert Street Tunnel”