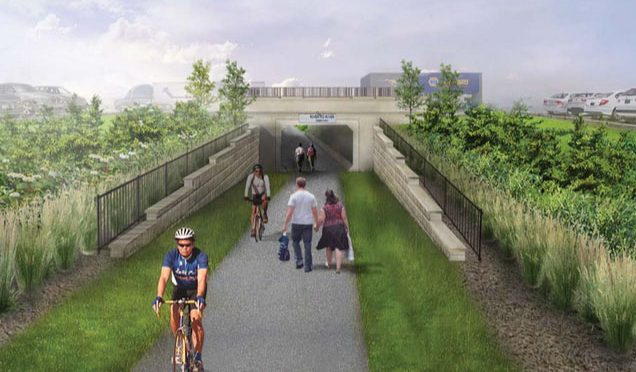 Could you ask for a better way to highlight West St. Paul?

OK, But What’s It Going to Cost?

West St. Paul has nearly completed the expensive Robert Street reconstruction project, so cost is a question everybody is asking.

And that’s the beautiful part of this project: $2.85 million in federal, state and county funding has already been secured. The total cost depends on the selected option, but they range from a low of $2 million to a high of $3.2 million. At most the project would need another $350,000, but it’s likely this project could have little or no cost for the City of West St. Paul.

These numbers come directly from Dakota County and their most recent project summary. It’s worth noting that these estimates are significantly cheaper that earlier proposals that had a potential $5 million price tag.

Imagine the benefits of a regional trail going through the heart of West St. Paul:

So What’s the Problem?

This sound great, right? So what’s the problem?

Dakota County has presented their plans to the city and it’s up to the city council to vote on the proposal. Currently, a majority of the city council is opposed to the project. It’s possible council members will reject the County’s plan and turn their back on this project.

When I talked to Jim Hartshorn, West St. Paul’s community development director, about how the trail might impact these developments, he said there’s no reason we shouldn’t be able to do both.

What Do We Do?

Our council members need to hear your voice. Here’s how to do it:

You can call or email city council members to let them know you support this project:

I support a safer Robert Street crossing for the River-to-River Greenway trail. This is a great plan that will be an asset to West St. Paul. I urge you to support the proposed tunnel.

We’ve put together a petition to show support for the project:

Anyone can sign the petition, even if you don’t live in West St. Paul. (Certainly support from West St. Paul residents has more weight, so we’re sorting out who is a resident and who is not. Support from outside the city helps prove the economic argument that people will come to West St. Paul for the trail and spend money here.)

You can also like the WSP Greenway Project on Facebook to further show your support and get updates.

To get more details on this project, I encourage you to read the proposals and learn more. You can also check out my other post on this topic, 7 Misconceptions About the Robert Street Tunnel.

One thought on “How to Make West St. Paul Awesome: The Greenway Trail”