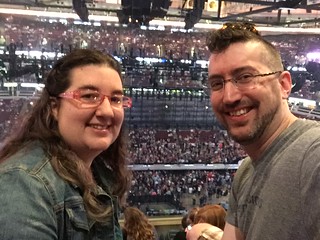 Last weekend Abby and I traveled to Chicago to see U2’s Innocence and Experience tour at the United Center. We saw the Sunday, June 28 show and it was pretty amazing.

It was our fourth U2 show, and while nothing can beat watching U2 during a rainstorm, this was pretty good. I’m continually amazed with their stage setup. They had a walkway down the middle of the arena, with a video screen/catwalk that could be raised and lowered.

So at one point The Edge is walking along the walkway while Bono is walking towards him on the catwalk, 10 feet higher in the air, with a video screen around him that makes it look like Bono was walking down the street. 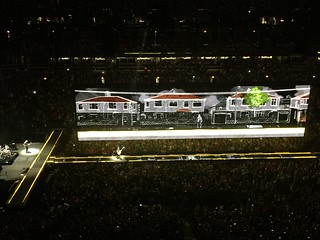 U2 also played a great mix of songs, playing a lot from the new album (7 songs total) but also playing all the old favorites. I had a hard time coming up with a classic song they didn’t play (“I Still Haven’t Found What I’m Looking For” is probably the one I missed the most, but they hit so many others and have so many classics, seems like a win to me).

They also included some they haven’t played much, including “Gloria” (not played live in 10 years) and “Lucifer’s Hands” (a b-side for the new album they’ve only played live once before).

I couldn’t help grabbing some video:

(I also got “Sunday Bloody Sunday,” “Every Breaking Wave,” and “All I Want Is You.”

The show was on Sunday, June 28 and the Friday before the U.S. Supreme Court had issued its historic ruling on gay marriage. This was the first U2 show since the decision and it was referenced a coupled times.

First, U2 played “Bullet the Blue Sky” and Bono referenced “Don’t Shoot” and “Can’t Breathe” from the Black Lives Matter movement, before doing a snippet of “The Hands That Built America” and then launching into “Pride (In the Name of Love).”

During “Pride” a rainbow flag landed on the stage that Bono twirled around before shouting, “Gay pride in the name of love!” Then he urged the crowd to sing for Baltimore, Ferguson and Charleston, referring to the on-going racial violence in the U.S.

While introducing the final song, “One,” Bono again returned to gay marriage: “Why would you be against anyone committing their lives to each other?” He dedicated the song to Chicago’s Pride parade that happened that day and put in a little dig that Ireland passed gay marriage before the U.S. (“We put the gay in Gaelic”).

All in all it was a pretty amazing show. Lots of energy, lots of heart, lots of rock.