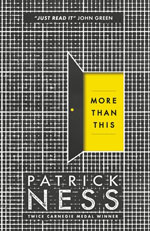 Desperate and depressed, Seth commits suicide and wakes up in an abandoned world. He finds himself inexplicably in his childhood home in England, across the world from where he drowned, and the world is dusty, overgrown and empty. Is he in some kind of hell? This one is weird and deep, but really good as you start diving down the rabbit hole.

And you can hardly say much about More Than This by Patrick Ness without dipping into SPOILER territory. So be warned, cuz that’s where I’m going.

I think the beginning starts off a bit weird. It’s really unclear what’s happening. We get this drowning scene and then quickly learn it was suicide. Then he wakes up in this weird space and it’s familiar but not real. It’s very Twilight Zone. We get flashbacks to his life in dream form, telling us how he got to suicide, including how he blames himself for his brother’s abduction and resulting trauma. Then there’s his secret gay romance that is revealed to the world.

Just when this weird empty world is starting to feel like some kind of metaphysical hell, he runs into other people (it’s about 150 pages in, so it takes a while). Now it really starts getting weird. Ultimately it has a Matrix-like quality where his previous life was a simulation and the empty, abandoned world is reality. It’s a trippy post-apocalyptic story, disguised as a guilt-ridden trip to hell.

How it all plays out is just gripping—I had to start covering up the right side page so I wouldn’t skip ahead. The characters he runs into are also fascinating, well-fleshed and very real.

More Than This is really weird, but it’s pretty amazing. It’s early to call it, but I’d expect to see this one in my top 5 for the year.