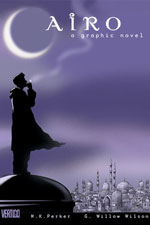 I’ve been getting into G. Willow Wilson since the Festival of Faith and Writing and appreciating her unique perspective. Cairo is her first graphic novel and brings together a group of characters that cross paths in the city of Cairo and shape each other’s destinies.

It draws on Middle Eastern mythology and recasts it for a modern age. It’s full of gritty realism and fantastic moments, peppered with comic book wit.

I can picture it as a movie. I suppose that’s natural with the shorter length of a graphic novel and the fact that it’s already visual. But even the story and the characters. It’s unique enough to be a fascinating movie, flipping stereotypes on their head and exploring new legends. Plus it could have a killer ensemble cast.