A while back we wrote the outline of a book together. I asked Lexi who she wanted the characters to be, what she wanted to happen and kind of made up the rest. She drew one picture and it got filed away for another day.

Today was that day. 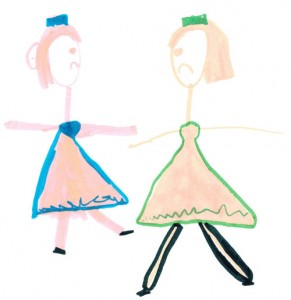 The Stephanies
We pulled out The Stephanies and started work on our book. I’m the writer and Lexi is the illustrator (apparently on Saturday we’re going to switch roles for her Star Wars book). I had to explain how illustrating works, how you have sketch things and draw them and redraw them and draw them again to get it just right. I explained how she had to practice drawing each Stephanie so they looked the same in each scene. I also explained how this wouldn’t be a quick project that we’d finish up today—it’d take a while. (All of which would probably make me a horrible art teacher)

So I spent the afternoon writing and Lexi spent the afternoon drawing. I have most of the story, though the ending needs some work and it needs lots of polishing (my last children’s book was Mike, The Cat, written when I was a child). Lexi has a lot of good drawings, though I think we need to pick some new colors or figure out what’s wrong with the scanner (the girls should be wearing dresses that are highlighter pink and yellow).

So that’s your preview of The Stephanies. It’s going to be awesome. I’m hoping we can release it later this summer, probably as an ebook and maybe as a full-color, printed book (I’ve been wanting to experiment with that for a while).

What About Milo?
And why isn’t Milo involved in this little project? Mainly because I insisted the kids clean their rooms on the first day of summer vacation and then keep them clean. Lexi finished after an hour or so on the first day. Milo kept procrastinating, not doing it and somehow completely avoiding it. For two days. He finally finished the half hour job tonight, so maybe I’ll have to find a role for him tomorrow.

Maybe he can be our publicist.