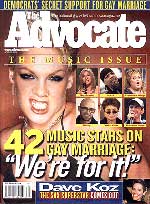 Pink has a rather provocative quote in the latest issue of the gay and lesbian magazine, The Advocate, about gay marriage:

I doubt anyone wants to revisit the gay marriage debate, but I found Pink’s comment intriguing. Regardless of your feelings on gay marriage, she makes a point about how as a society we trash marriage.

Celebrities and people in general have been abusing marriage for years, and no one puts up much of a fuss until homosexuals want to get married — and most of them are more committed than J-Lo or Britney. Maybe instead of (or in addition to) a gay marriage ammendment we should be considering a ‘respect marriage’ ammendment (or simply legislation), something that encourages, supports, and protects committed, loving marriages.

The Respect Marriage law could make pre-marital counseling a requirement for every marriage, make public dollars available for marriage counseling, and make divorce a harder proposition — possibly a fine for breaking marriage vows, or something less draconian like intense support and counseling for those considering divorce. A law like that could go a lot of strange ways, but I think if there were enough well-thought out and well-executed “carrot on a stick” measures (as opposed to just plain stick measures) to encourage marital faithfulness, maybe it would help make a dent in the 50% divorce rate.

While I certainly value marriage, I have to wonder what some people are fighting so hard to protect. Marriage is a broken institution in this country, and if you’re concerned about marriage it seems like gay marriage is the least of your worries. You have to draw the line somewhere, but how about the people trashing marriage, not the people eager to get married?