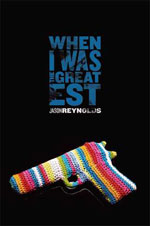 When I Was the Greatest by Jason Reynolds has the gritty, urban feel of Walter Dean Myers, but feels a little more intentional and unique.

It’s the story of a teenager in the hood, trying to stay on the straight and narrow, while still being a teen. It’s a powerful story of family and loyalty that doesn’t descend into the worst of urban stereotypes where everyone gets shot, does drugs and ruins their lives.

Instead it’s about redemption.

I love the character Needles who turns to knitting to control his Tourette syndrome. It’s a realistic coping mechanism and it’s just so wonderfully out of place for these tough urban characters.