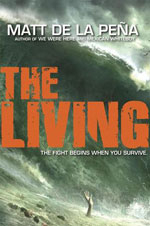 Conspiracy and cover up in the midst of apocalyptic mayhem on a cruise ship—with a scary disease thrown in for good measure.

The hits just keep coming in The Living by Matt de la Peña.

The story centers on Shy, a hard-working kid stuck in the middle of it all. In many ways this book can’t quite decide what it is, and you get some of everything from class-based cruise ship hijinks to suicide mystery to Titanic sinking to adrift in a life boat.

It’s also the first in a series, so there’s not a lot of closure (though it’s better than most). The cruise ship apocalypse is taken care of in volume one, but there’s still the super disease conspiracy and a giant earthquake, which leaves plenty of mayhem for later in the series. It’ll be interesting to see if this turns into a post-apocalyptic tale or if it’s more firmly grounded in the midst of the apocalypse.

What’s the plural of apocalypse?

The relentless pace was fun, but it felt awfully jumbled.