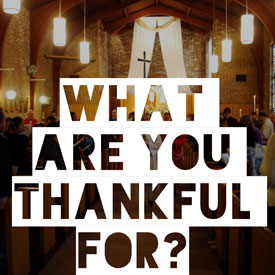 It’s the day before Thanksgiving, the busiest travel day of the year, and for the first time since high school I’m not traveling anywhere. I guess 1996 would be the last year I didn’t go anywhere for Thanksgiving. In college I always drove the 700 miles home to Michigan. Once married, we alternated Christmas and Thanksgiving between our parents in Wisconsin and Kansas. The former was only a 300-mile trip, but the latter was another 700-mile full day in the car.

So I’m pretty used to traveling on Thanksgiving. On the years I made the 700-mile drive I’d get up at some ridiculous pre-dawn hour so I could be on the road early and make good time. The alarm would go off at something awful like 4:30 and I’d be on the road by 5. Except I could never sleep well before long drives and would always be up before my alarm. No matter how early it was.

I couldn’t sleep this morning either. No alarm was set, but I was awake by 5. Some habits die hard, I guess.

This year we decided to stay home for both holidays. Last year we somehow ended up traveling every other weekend in November and December and we just couldn’t handle it this year. Too many miles, too much whining from the back seat, too much stress. Plus, the idea of having our own holiday and forming our own traditions sounded pretty great. We’ve never done our own holidays, so we haven’t forged many of our own traditions.

Growing up we rarely went anywhere for the holidays. We had fairly set traditions, like going to cut down a Christmas tree the day after Thanksgiving and setting it up that night. Watching Ernest Saves Christmas on Christmas Eve. OK, so sometimes family traditions are weird. But that’s what’s fun about them.

Through the years I’ve always been thankful that I had a place to go for the holidays. No matter what happened that year, no matter what life transition happened (and there were a few, between getting married, watching my parents get divorced and seeing them get back together), I always had a place to call home. A lot of people aren’t so lucky.

I’m also thankful that for all those miles traveled I never had any major car trouble. It always seemed like a minor miracle that I’ve never been in a big accident, never had my car break down, never had a flat tire. I’ve had my share of close calls. I hit a bird in Chicago once. A jet ski fell off a trailer just in front of me. It wasn’t a holiday, but on one snowy drive I did lose control and fishtail into a ditch, but I was nearly able to drive out of it. Plus my parents were there to help push me out and we were back on the road like nothing happened. Later that day on the Interstate I watched the truck in front of me start swerving and spin 40 feet off the road into deep snow. Last year I drove several hundred miles to Thanksgiving with the check engine light on, worried something bad was going to happen. But all systems were go.

I’ve had some close calls over the years, some diverted plans and some travel sickness I’d rather not detail, but we’ve always made it. I’m incredibly thankful for that.

I have a lot to be thankful for at Thanksgiving. This year it’s going to be staying home and doing nothing with my family. Forging our own traditions, like the day before Thanksgiving donuts (it’s a thing) and setting up our Christmas tree the day after Thanksgiving (some traditions are meant to endure).

What kind of people are we when all we ever do is complain?

I feel like that’s what we’ve descended to. We complain about the cashier. We whine about the business that we think screwed us over. We rant about not getting the kind of service we think we deserve. We scream about the idiot politician.

Sometimes I think social media just magnifies it all.

That’s not the kind of person I want to be. I’m tired of being the person who complains that the express cashier at Target is going so slow because he insists on scanning every item before bagging, a process that involves juggling the items on the tiny counter space he has because it was freakin’ designed for him to immediately bag each item after scanning it. Clearly the holiday help is not as well trained or as well practiced.

I seriously stood there getting so annoyed at this poor Target cashier. I’m tired of being negative all the time.

If I’m that negative over something stupid, what happens when it’s something that matters?

Those words came to Madeleine L’Engle when her granddaughter was hit by a truck. L’Engle was across the country and opened her prayer book before bed. Two things fell out. One was a picture of her granddaughter from a few weeks before, the other was a card with those challenging words from John of the Cross. L’Engle confesses in Walking on Water that she had to make that act of thanksgiving.

I wonder what she was thankful for?

It was 10 days before L’Engle’s granddaughter regained consciousness and they knew she would recover.

I want to be the kind of person who is thankful, not just when life is good and it’s easy to be thankful, but also when life is dumping on us and it’s so very, very hard.