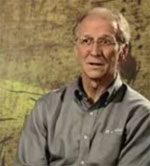 Came across a very interesting video from John Piper, pastor of Bethlehem Baptist in Minneapolis and head of Desiring God, a nonprofit religious organization that advocates the “supremacy of God.” I’ve done some work for Desiring God and I always find them very interesting to deal with. Piper is intensely cerebral. Trying to edit and work with their copy is an immense challenge. I’m always trying to get them to use language normal people can understand.

And that’s all because Piper is smart. Very smart. Dude talks in heady concepts and lingo that’s hard to get your head around. I don’t always agree with all of it, but I often find it immensely challenging (his work on Don’t Waste Your Life is perhaps the most accessible and incredibly convicting [though I should note that I didn’t work on the DWYL web site!]).

I say all that because I have great respect for Piper and want to give some context of who he is before talking about this video.

So Piper made a conversational video explaining his heart and concerns about the 2008 presidential election. The nearly seven-minute video covers three basic topics:

END_OF_DOCUMENT_TOKEN_TO_BE_REPLACED

This has been an interesting couple weeks of politics, getting sick of politics and not listening to myself about politics. I’ve been twittering and spouting off about politics because it riles me up. Because I disagree. Because I hear things that strike me as wrong and I want to respond. And what I failed to realize is that so often we just disagree (like I said before and then ignored) and pouncing on each other doesn’t help. I’m sorry.

I think politics would be a lot more friendly if we could cut out the rhetoric and just focus on an issue. If we could see where and how we disagree and just be fine with disagreeing. It’s easier to find a path forward if you understand where the other person is coming from. Too often in politics (myself definitely included), we don’t take the time to do that. Instead we jump to the conclusion that you must be stupid. That’s probably why I don’t usually talk much about politics (I tend to disagree with the standard Christian/Republican stance) and why in the past two weeks of talking more about politics I’ve annoyed some people and riled up others. Not that frustrating or riling is bad, but I’m not sure what I’m accomplishing.

Take the Test
So let’s accomplish something. My sister-in-law took one of those online quizzes that tell you where you’re at politically. These things are always goofy because on some questions I hem and haw and then wonder if I had answered differently if it would have changed the outcome (I checked, it didn’t change much). But at any rate, I think it can be helpful to see where we stand.

So give it a try. It’s about 40 questions and takes less than five minutes.
END_OF_DOCUMENT_TOKEN_TO_BE_REPLACED