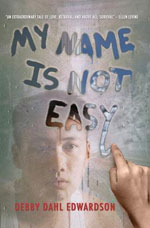 My Name Is Not Easy by Debby Dahl Edwardson is the loose story of a group of young teens who are white, Indian and Eskimo gathered at a Catholic boarding school in remote Alaska in the 1960s.

It speaks to the hardships and injustices inflicted on the native people, but also follows them as they come of age, deal with tragedy and struggle to find their own voice.

It’s an interesting historical perspective and study of these characters, but the plot lacks direction and focus. It’s more a snapshot of life than a driving story.

Three compelling ideas stuck with me: