I’m not exactly athletic. Anybody who knew me growing up knows that I stayed far away from most anything athletic. I liked hockey, bike riding and rollerskating, though I never played anything more than pond hockey. I did actually play intramural broomball in college, but that’s the beginning and end of my team sports experience.

My high school history teacher, who also happened to coach the cross country team, once told my parents I’d make a good runner. Maybe I should have listened.

I ran a 5K on Saturday and with the Twin Cities Marathon yesterday, running has been on my mind.

Personal Best 5K
I hate it when people constantly brag about their running achievements, so I try to keep mine to a minimum. But I did manage a personal best in the 5K on Saturday with 28:13. Most of the summer I’ve been doing longer runs (5-7 miles) and I’m not well adjusted to the relatively short distance of a 5K. But I did pretty well on Saturday, running hard early, not dying in the middle, and pouring on a ridiculous sprint I didn’t know I had in me at the end. It’s not a particularly fast time for a 5K, but the low-9 minute miles is a lot faster than I normally run.

Marathon
The funny thing about running is how much work it takes to get better. This is probably obvious to most people, but my complete lack of athletic experience gives me nothing to base improvement on. I have no idea how hard athletes work. Now that I’m running, I have an idea.

The problem with running is that there’s such a chasm between milestone achievements. If you don’t run at all, a 5K sounds daunting. Who wants to get up on a Saturday and run three miles? A few years ago, that’s the camp I was in. But now a 5K is too short. All that effort for 28 minutes of running? I’d rather run twice that far.

Of course getting to twice that far has taken about six months. This spring I actually read a book on marathons and thought maybe someday I’ll run a marathon. I wasn’t incredibly serious about it, but I did think it was conceivable. I checked out upcoming marathons and mapped out the training schedule to see if I could do it. If I followed the training schedule this book laid out, I would have been ready to run the Twin Cities Marathon with a week to spare.

That’s hilarious. Simply building from three miles to seven miles has taken me six months. Getting to 26 miles feels like an impossibility. I realized how crazy I was being when I noticed a 13-minute per mile minimum pace for the Twin Cities Marathon. At the time I was averaging a 12-minute mile on my longer runs. But I frequently started at over 13 minutes, and sometimes even 14 minutes for that first mile.

In the end, I have an incredible appreciation for people who run. It’s seriously hard work and requires tremendous dedication of body and spirit. It’s one thing to keep your body going, but it’s another thing to keep your spirit motivated when your body hates you. The time commitment alone is staggering. Serious marathon trainers run at least three times a week and those longer runs take time (it takes me an hour to run six miles). Simply finding the time to run (and get cleaned up afterward) is intense.

Sometimes I hate running. It hurts and my body is tired and I don’t want to crawl out of bed. But some days I crave it. I itch to get out and move my body. I’ve learned that sometimes stopping is the worst thing you can do and even when you think you’re completely spent and can’t go any farther, you can.

Yesterday two bombs exploded near the finish line of the Boston Marathon, killing three and injuring more than 150.

It’s always difficult marshaling my thoughts in the wake of these tragedies. Everything is a little scattered and disjointed.

News Coverage
As has become the norm, this is another event I learned about through social media. I saw the first comments about an explosion at the finish line of the Boston Marathon (my first thought: They run the Boston Marathon on a Monday?) on Facebook. I hopped over to CNN for details, found the barest sentence of an update and went back to social media for all kinds of updates. Seems like it took less than 20 minutes for photos and video of the blast to surface. Vague details, misinformation, ridiculous speculation and stories of the triumph of the human spirit were all flowing.

I turned on network TV coverage for only a few minutes, just to watch the president’s address, and was quickly pushed back to the Internet. I can’t stand the unending footage of shaky cam footage of carnage. I much prefer the news online where I can pick and choose what I want to see, decide for myself whether that video is worth watching, get the warning about gruesome photos and decide if I need to see that.

It’s a different experience. Though the need to know something, anything, is pretty much the same.

ContextRight now this attack feels huge. It will be interesting to place this event in context once we have some distance. It’s not Sept. 11 big, but it has that kind of feel to it. While the number of injuries is enormous, so far the deaths are, thankfully, relatively low.

I think the manner of the attack rather than the impact is what makes it feel so large in my mind. It wasn’t just some random bombing, it was targeting a major sporting event that draws half a million people. It’s also the first major attack on U.S. soil since Sept. 11. While we still don’t know much about the attacks, the manner of them—what appears to be IED-type bombs like what our soldiers face in Iraq and Afghanistan—in some ways brings those conflicts home. It’s too early to know if there are any connections, but it’s a similar style of attack.

Finally what makes it feel larger in my mind right now is perhaps the way I’m experiencing it with almost immediate social media updates. The 1996 Atlanta bombing at the Olympics would be pretty comparable—major sporting event, two dead, more than 100 injured. Though my experience of that event was extremely limited. I would have been in high school at the time and would have paid minimal attention to the news. I knew it had happened, but I don’t remember following the updates. While the Olympics was obviously covered pretty heavily, we didn’t have the civilian photos and videos like we do now.

For better or for worse, that allows us to experience these violent events more intimately. It gives us a small taste of what some people around the world experience on an almost daily basis.

I Want to Run
One thing I do feel after the Boston bombings: I want to run. I’m not much of a runner, but I’ve been getting into it, slowly trying to build up my endurance. I don’t know if I could ever run a marathon (I don’t think I’ve even run five miles at once yet), but at times I think about it. I usually run on Tuesdays, so running today isn’t anything special, but it is important that we get up and keep moving. In my own little act of defiance against our attackers and in a show of support for those hurting in Boston, I’m going to run.

Update: I ran five miles this morning (and didn’t collapse). 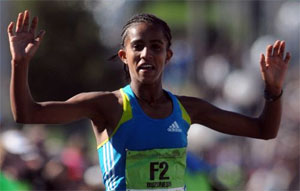