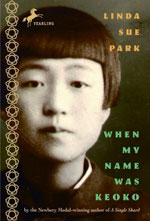 When My Name Was Keoko by Linda Sue Park is set in occupied Korea during World War II. It follows a brother and sister as the Japanese inflict more and more hardships.

The story itself didn’t blow me away, but the history was a perspective I knew nothing about. I don’t know much about Korean history, so it was fascinating to get this glimpse.

Much of the World War II story we get is the brutality of the Nazis. I’ve heard some about Japanese soldiers, but this viewpoint is more from a civilian point of view as Korea has been occupied by Japan for more than 30 years. The story chronicles many of the ways the Japanese tried to eliminate Korean culture, including banning the language and writing, forced renaming of citizens and even uprooting and burning the national tree of Korea.

The Japanese were working to homogenize their empire, crush the spirit of any resistance and wipe out any unique identifiers that Koreans could take pride in.

With this backdrop it becomes painfully obvious how offensive it is when non-Asians treat all Asians with a broad brush, confusing Koreans for Japanese for Chinese and then dismissing it all as meaningless.