The South St. Paul vs. West St. Paul food drive beef continues, but it’s all in support of Neighbors Inc. Mayor Dave Napier taunted South St. Paul, saying he just picked up some Henry Sibley Warriors jerseys, ready for the South St. Paul city council to wear when they lose. You can get all the details at WSPFoodDrive.com.

A food local businesses are offering special incentives for bringing in donations, such as a free day pass from the YMCA. You can find the listing on the WSPFoodDrive site.

A survey was conducted at the recent West St. Paul Neighborhood Meetings, along with participation online, and the results are now available (the report also includes results from 2017 and 2018).

One of the most interesting (and obvious) results of the survey is the proportion of people who took it online and their corresponding ages. While the 65 and over crowd was easily the largest age range in all three in-person meetings, three younger age brackets them in the online survey. The online responses even beat the in-person responses in sheer numbers (158 responses online, 147 in person).

The funeral is on Thursday, March 14 at St. Stephen’s Lutheran Church. Napier noted that the city would prepare a proclamation at a future council meeting.

Four new firefighters were welcomed to the South Metro Fire Department. Mayor Napier also gave a heartfelt thanks to retiring Fire Chief Mike Pott, who has served with South Metro (which was the WSP Fire Department before that) for 36 years.

Claudia Egelhoff from Act on Alzheimer’s gave a presentation about their group’s effort to help address dementia in West St. Paul. The group started in 2017 when a citizen approached Mayor Jenny Halverson. The community has rallied in response, with participation from nearly every major organization in the city.

Winter Storms Having a Spring Impact

We had record snowfall in February, and we’re starting to see the impacts:

The city council awarded a bid for the reconstruction of Livingstone Avenue from Mendota to Wentworth. The bid came in  $550,000 lower than the estimate, so that’s some good news.

At a recent city council meeting a resident suggested during citizen comments that the city should allow for temporary no parking zones. They gave the example of moving and needing to park a moving truck in front of their house and wanting to save that parking spot. Having dumpster delivered is another common example—what do you do if cars are parked in front of your house and there’s no where to put the dumpster?

The city had an ordinance to allow for that dumpster, but nothing to ensure that cars weren’t parking there when it was delivered.

The idea also expanded to allow for temporary parking for special events in areas where parking isn’t permitted.

Overall it’s good to see the city responding to citizen suggestions. Mayor Napier encouraged citizens to read over the new ordinance (plain English explanation and the actual ordinance) and give the council feedback. This was a first reading of the proposed ordinance. Next will be a second reading and a public hearing. 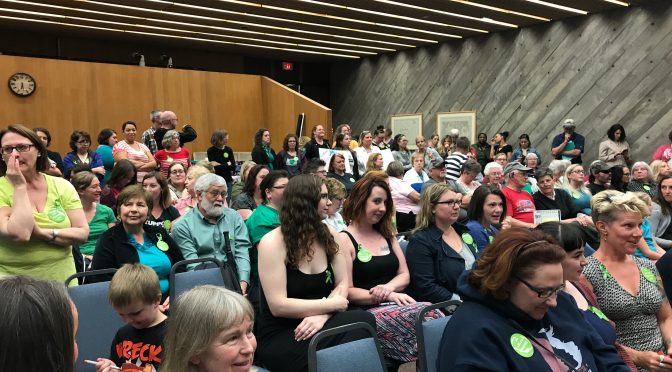 Many of the woman dressed in green and wore buttons quoting Mayor Halverson, “This will not be forgotten, folks!” END_OF_DOCUMENT_TOKEN_TO_BE_REPLACED

So let’s look at what happened in more detail. END_OF_DOCUMENT_TOKEN_TO_BE_REPLACED

Update: Read my latest post about Dave Napier running for mayor in 2018.

The heated elections in West St. Paul continue. I already posted about the West St. Paul mayor election, and now I’m going to look at the West St. Paul City Council Ward 3 race. We have the incumbent city council member Dave Napier running against challenger John Ramsay (who also ran in 2014 and lost a close race).

Much like the West St. Paul mayor’s race, in city council we’re facing the same issues. I think it comes down to vision and investment vs. penny pinching.

You can read the Dakota County Chamber of Commerce candidate questionnaires and watch the public television candidate forum and meet the candidates (though it does not include John Ramsay). You can also get details from official sites for John Ramsay and Dave Napier.

Dave Napier has been on the council for four years and has been involved and advocating for strategic planning. In the candidate forum he talks about getting community input and then pursuing those goals.

John Ramsay talks about the importance of business to the exclusion of everything else. He campaigned hard against the Robert Street project in 2014, and continues to declare this necessary, vital project a fiasco. END_OF_DOCUMENT_TOKEN_TO_BE_REPLACED