The Pioneer Press did a quick write-up on my Walk for Water stunt in today’s paper. Charity: water gets a nice mention and link, as does the Bald Birthday Benefit (now we can see what kind of bottom-line boost newspaper publicity offers). The article also mentions that we hit the $600-goal in only six days—so hats off to all you folks who helped us get there and those who have kept us going towards that crazy $5,000-goal.

Not a bad story, though I think I’ll win an award for dumbest quote of the year:

Lugging 40 pounds of water “will actually be fairly strenuous,” he said.

Actually? Fairly strenuous? Who is this idiot? Carrying 40 pounds of water two miles up the Mississippi River bluff is going to suck. It shouldn’t be impossible, but for a mostly sedentary guy like myself it won’t be a walk in the park. Guess I need to work on saying something quotable.

Moving on. As a bit of fact-checking nit-pickery, I’ll be carrying the 40 pounds of water two miles, not one mile as the article states. It’s two miles from the Mississippi River to my house. But I understand the confusion. I threw out a lot of information in the 15-minute call I had with the reporter. And I’m complicating things myself because I’m planning to drive down to the river and then walk back with the water. I realize it’s cheating a bit, but accuracy isn’t the goal here. Besides, I’d like to minimize the time and effort required of the folks going with me.

Anyway, it’s pretty cool to get some publicity like this. I hope it leads to more clean water for more people. Remember, it takes only $20 to provide one person with clean water for 20 years. Wish me a happy birthday and donate now. Thanks.

A couple weeks ago I took a walk. As part of this whole Bald Birthday Benefit raising cash and awareness about water, I’ve wanted to understand a tiny bit of what life is like for the more than one billion people in this world who don’t have easy access to clean water.

When I want clean water I turn to one of the 13 faucets in my house that offers water (that’s sinks, showers and outside spigots), usually with my choice of hot or cold water. The water is clean and pure and I pay very little for it (consequently, there’s little incentive to conserve).

The one billion people who live without clean water aren’t so lucky. Many of them walk as far as three hours per day to get water. And whatever water they need, they have to carry. Imagine spending three hours of your day hauling water back and forth. For every flush of the toilet or extra minute you spend in the shower, imagine if you had to walk three hours to get that water. And the water they get isn’t exactly clean. It’s usually chock full of parasites and disease, killing 42,000 people every week.

It’s kind of insane when you think about it.

END_OF_DOCUMENT_TOKEN_TO_BE_REPLACED 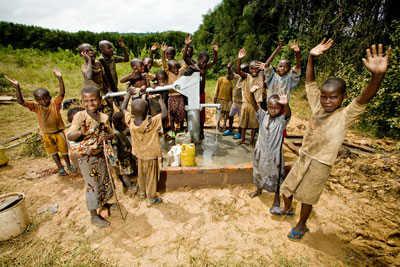 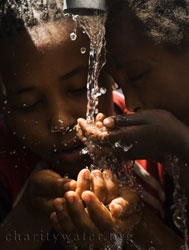 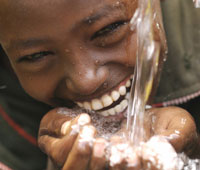 I think charity: water does some good work. One of the coolest things they do is bring you closer to the people they help with pictures, stories and videos. One of my favorite videos is this little 5-minute clip taken when charity: water was drilling wells in Ethiopia this spring as part of the Twestival.

In the video a few Internet geeks decide to carry 5-gallon jerry cans on their backs just like the people of Ethiopia do every day. Obviously carrying that water didn’t help anybody, but it made those well-off Americans understand what not having clean water really means. It made the situation personal (and painful), something Shane Claiborne often talks about (Don’t make poverty history, make poverty personal).

At the very end of the video they show an 11-year-old girl carrying the same 5 gallons of water. She does that every day. You can help change that.

This is actually something I’ve [rather foolishly] thought about trying.