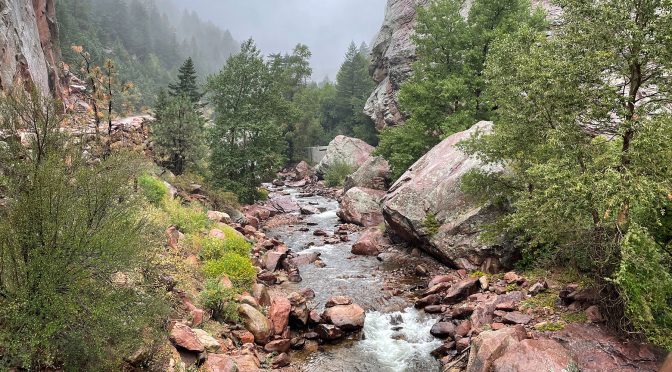 So I took the opportunity to do some major mountain biking. It was actually pretty hard to find some mountain biking trails I felt like I could do without killing myself. I probably misjudged how trails work in Colorado, where they seem to often be multi-use and not specifically designed for mountain bikes. Which means less intense mountain biking, but you can probably go longer distances because there are more cross country elements.

At any rate, I went to a bunch of places, had fun, and didn’t die. So win.

Beer Creek proved to be a good start—and a rude introduction to high altitude biking. There was a killer hill that about did me in. Then I looked at my biking app and saw the climb barely registered and there were much worse hills coming. I re-thought my plan and stuck to going along the creek, which was much flatter and fun.

I was really looking forward to a series of trails just outside of Grand Lake, including one called “Moose Meander” that warned of moose. Unfortunately, recent wildfires had decimated the area and there wasn’t a chance of a moose sneaking up on anyone.

A flat tire and running out of time cut this one short, but I really could have explored more, even if the scenery wasn’t quite what I expected. Also, being on the doorstep of Rocky Mountain National Park and over 8,000 feet meant the hills were just brutal.

This finally felt like the ‘mountain biking in the mountains’ riding I was looking for. Near Boulder, this one required driving up a mountain to get to and it really had some intense flow at the beginning. Nothing over my head, but definitely testing my limits.

Next I stopped in Kansas (yes, Kansas) for some biking. This was mostly about breaking up a long, boring drive. And initially I thought it wouldn’t be that good. Wrong. Far from flat, the land was dotted with rock formations and canyons. The trail was pretty intense, and at one point I realized a fall would mean landing in prickly pear cactus. Again, I wanted to do more, but had to get back on the road (sweaty, no less).

Just a few miles from my parents’ house, this was one of my favorites. It’s an old lake bed that was drained in the 1970s or 1980s and is now fully wooded and practically deserted. The remains of a damn on one end offered some hard but manageable climbs while the lake bed offered plenty of ups and downs.

On the whole it was lots of twists and turns, some ups and downs to keep it interesting, but mostly whipping all around through shady forest—not what you’d expect in the middle of Kansas.

On the way home I stopped in Des Moines and hit Denman’s Woods. Again, I was breaking up a long drive. This one was pretty easy twists and turns in a wooded flood plain. Fun, but nothing spectacular. A slightly harder route was nearby and I probably should have hit that one, but honestly I was looking for quick and easy and this fit the bill.

Like any Colorado trip, there were plenty of highlights. I had a drizzly day at Eldorado Canyon and Golden Gate State Parks. I ventured into Rocky Mountain National Park and went over the top, stopping for lunch with a moose along the way. I found some time to hammock and sat by a river.

On the way to Kansas I stopped to see Monument Rocks and some nearby attractions, something I always wanted to see since I was little. It did not disappoint (except for the fact that it’s privately owned and has practically nothing—you could drive your car into it; someday this needs to be a protected park).

I sort of planned the trip around Five Iron Frenzy’s album release show. The album came out at least a year before during the pandemic, but they were finally able to do a show. I was thinking of going to Colorado anyway, and that really sealed the deal.

Last time I saw Five Iron play was almost 10 years ago when they reunited the first time. The major difference this time around was the crowd was about 10 years older.

They played mostly old songs, I think only two from the new record (ironic since it was a release show), and it seemed like it was over pretty quick.

I remembered my ear plugs and overall felt pretty old to be rocking out at a punk show.