I only looked at data going back to 2008, but given inflation and the rising cost of campaigns, it’s likely the most expensive election season in West St. Paul history (I don’t quite have the data to verify it, but I’m pretty confident).

Jenny Halverson spent $9,878 in 2016 (and won)—$1,204 more than her opponent, David Meisinger. It’s only $478 more than what Meisinger spent in his winning campaign in 2014. Halverson’s record was likely helped along by a three-way primary with Meisinger and Morgan Kavanaugh.

Meisinger spend $6,396 in 2018 (and lost)—$623 more than his opponent and victor, Wendy Berry. Meisinger’s record was also likely helped by a four-way primary with Berry, Lisa Eng-Sarne, and John Ramsay (though it seems Meisinger likely spent the least in the primary, so maybe not).

Again, this is looking back as far as 2008, but it’s likely the most expensive in history. City council campaigns hadn’t crossed $3,000 until 2016 with Anthony Fernandez, and then Meisinger, Berry, Jim Probst, and John Justen all spent more than $3,000 in 2018.

That’s only going back to 2008, so it’s probably not the least expensive in history.

It’s easy to spend nothing and lose, so let’s look at those who spent the least and still won.

(I’m not counting the $600 that John Zanmiller spent in 2010 against Mary Jane Duchene—while he technically had opposition, Duchene didn’t spend anything and hardly contested the election. Zanmiller won with nearly 68% of the vote).

That’s only going back to 2008 and only looking at contested mayoral campaigns. I’m sure there have been cheaper campaigns that won, but in recent history, it’s Napier.

Ed Hansen reported $0 in his 2010 win (he should have at least had a $20 filing fee). His opponent, Pat Armon, spent $857. The margin of victory was only 61 votes, one of the closer races in recent history (I believe the closest race in recent history was John Bellows’ 2014 win over Ramsay by 38 votes). Hansen would later resign after multiple controversies.

Again, this is only back to 2008 and only counts contested city council campaigns (there have been plenty of uncontested campaigns, which are just as cheap).

Going back to 2008 and looking only at contested races, the candidate who spent the most won 56% of the time.

But for all three contested races in 2018, the candidate who spent the most money lost.

However, only one of those races could be considered a frugal victory—Napier’s mayoral win. Berry and Justen both spent less than their opponents, but more than the average for city council races.

An unopposed campaign is pretty cheap. How often does that happen? 44% of our elections were unopposed going back to 2002.

In 2018, one of the four races was uncontested (ward 1, incumbent Dick Vitelli; incidentally, after being appointed to replace Hansen in 2013, Vitelli has run twice for reelection and been unopposed both times).

2008 and 2016 are the only years in recent history when all four races were contested.

Election campaigns in West St. Paul are getting more expensive, though that doesn’t necessarily mean victory, as 2018 showed. However, 2018 certainly drove up the cost of elections. Here’s a look at the combined costs of elections:

It’s also getting more expensive to be on city council. Here’s a look at the average cost of city council elections each year: 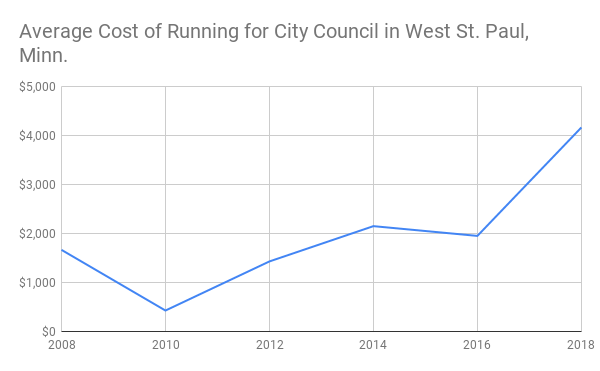 So Where Does All This Money Come From?

The idea of having to come up with $2,300 to run for city council may seem daunting. Where do they get the money? Campaigns are either funded by contributions or the candidate themselves. It’s varied throughout the years.

In 2008, Mayor John Zanmiller raised his campaign funds entirely from contributions. The same year, Council member Darlene Lewis self-funded her entire campaign. (Recently Lewis wryly commented that she paid for it with the city council salary she received. Council members currently receive an annual salary of $7,508 and the mayor receives $9,356 [this reflects a 5% increase approved by the previous council on July 23, 2018].)

Both Zanmiller and Lewis won in 2008, so both approaches can work.

While the source of funds and the exact mix depends on the candidate, it’s notable that the 2018 winners relied primarily on contributions. Napier, Berry, and Justen all relied on a long list of small contributors. Meanwhile, Fernandez self funded nearly 90% of his campaign, Meisinger at least 86% (if not the entire thing), and Probst nearly 70%.

So campaigns in West St. Paul are getting more expensive, but that doesn’t mean running for office is limited to those who can afford to pay for it themselves.

If you love your community and you’re willing to work hard to make it better, I’d encourage you to think about running for office.

Three city council seats and the mayor will be on the ballot for West St. Paul in 2020. Those seats are currently held by Mayor Dave Napier, Bob Pace in Ward 1, Anthony Fernandez in Ward 2, and Lisa Eng-Sarne in Ward 3.

The filing period will open in mid-May 2020.

That’s a lot of numbers and assumptions, so let’s qualify things a bit for those who love the fine print:

Full disclosure: I donated to the campaigns of Dave Napier and Wendy Berry in 2018.

One thought on “How Much Do Election Campaigns Cost in West St. Paul?”