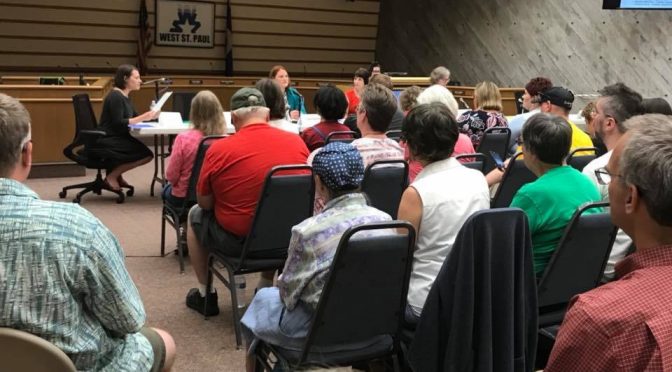 All four candidates were invited to this non-partisan event, organized by Women of West St. Paul using rules from the League of Women Voters:

So yeah, Lisa Eng-Sarne was the only candidate at the candidate forum. It’s unfortunate that Wendy Berry couldn’t attend, but a death in the family is out of anyone’s control.

But the fact that David Meisinger and John Ramsay didn’t show up is incredibly telling and part of a pattern. Meisinger has no campaign site—but never mind him. David Meisinger shouldn’t hold public office. Ramsay has refused to answer questions, and now he misses out on a chance to connect with the community (ironic, considering his campaign slogan seems to be “Connecting Our Community”).

If Meisinger and Ramsay can’t be bothered to engage the community, then they have no business running for office.

But that’s more than enough time to waste on the no-shows.

The candidate forum was the Lisa Eng-Sarne show. She had the opportunity to answer the pre-submitted questions and share her vision for West St. Paul. Eng-Sarne had the challenge of answering all the questions immediately—not getting a chance to think while someone else answered. She admitted to being nervous, but she did a great job.

It was a bit humorous that it was all her (“Candidate Eng-Sarne, would you like to go first?”), but it was still a great opportunity for the public to hear from the candidate.

I’m hopeful that people will still be able to hear from Wendy Berry, if not online then at least in person as she knocks on doors, attends Night to Unite meetups, and meets with voters. Wendy’s certainly not afraid of engaging with people. She’s answered my questions and earned my support.

This kind of turnout and enthusiasm in a local city council race is so encouraging. I’ve always complained about the lack of information about local races. And clearly I’m not the only person who wants more. The people are showing up. And it’s so good for West St. Paul.

The primary is August 14, just two weeks ago. Go vote.

(A big huge thank you to the many people who worked hard to put on this candidate forum. I’m so grateful for your hard work.)