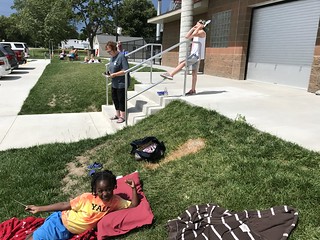 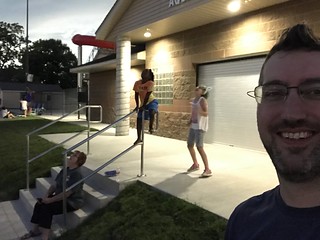 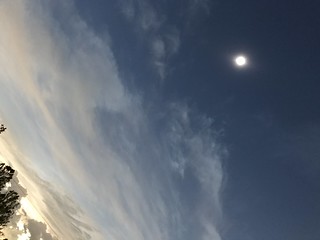 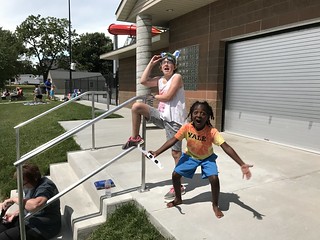 After spending a few days in Kansas with my parents, we headed home on Monday, Aug. 21, planning to drive through Nebraska and stop to see the eclipse. We usually go home through Missouri, up I-35, but I figured traffic would be pretty crazy.

We pulled into Geneva, Nebraska, just before 10 a.m. The eclipse wouldn’t start until 11:30 and totality wouldn’t begin until 1 p.m. In this town of 2,000 people, the city park was already starting to fill up.

The skies were partly cloudy, with some troubling cirrus clouds that mostly obscured the sun. I was worried about what we’d be able to see, but on a partly cloudy day like that it could change in 10 minutes and we’d have a perfect view. So we opted to stay where we were and hope for the best.

When the eclipse started at 11:30 we were still fighting clouds and couldn’t get a clear view. But by noon things were looking good and by 12:30 we had clear enough skies.

It’s a little maddening to plan your day around something that’s entirely dependent on the clouds. I’m thankful it worked out.

There were really two different eclipse experiences. First was the partial eclipse, which started at 11:30 and was visible to varying degrees across the entire country for several hours. Then there was the total eclipse, which started at 1 p.m. and was only visible in a narrow, 70-mile band that stretched from Oregon to South Carolina and would only last for two and a half minutes (or less, depending on where you were along that band).

The partial eclipse was interesting.

Through eclipse glasses you could watch the moon slowly slide over the sun. That was pretty weird to see, but it wasn’t much better than star gazing.

But as more and more of the sun was blocked, weirder stuff started happening:

But totality was amazing.

When totality hit it was like nothing I’d ever experienced. There was almost too much to focus on. I missed the shadow bands and didn’t see the moon’s shadow come screaming across the land at 1,600 mph. I barely saw the Baily’s beads and the diamond ring effect (I wasn’t sure when it was safe to look without the glasses).

But then there it was. Everything got dark, not like full night, but definitely like twilight. All along the horizon, in every direction, it looked like sunset. All the street lights came on in the park where we were.

And the sun and moon were this bizarre dark yet flaming ball up in the sky. The moon was a dark orb completely covering the sun, yet you could see what look like yellow flames coming off the moon. It was crazy.

I didn’t intend to take photos, knowing they wouldn’t come out well, but I ended up taking a few anyway.

It hardly seemed like two and a half minutes had gone by, but then it was over. The moon started sliding away and the sun reappeared. It immediately returned to daytime, and that was it.

We still had another hour and a half of partial eclipse, but at this point we’d seen the most amazing thing ever and the partial eclipse just paled in comparison.

The kids and I had a long drive home (6-7 hours), so we loaded up and were on our way by 1:15. Of course we joined all the other eclipse seekers and it ended up taking us 10 hours to get home.

A long day, but totally worth it.