Apparently this is the year I blog about local election politics. Sheesh. I didn’t intend to get into these discussions, but it’s been so frustrating to get misleading information. It’s hard enough to research local elections, we shouldn’t have to wade through misleading info as well.

So School District 197 (West St. Paul, Eagan and Mendota Heights) has a referendum on the ballot to approve levies for three separate things—technology, security and a new stadium.

You can get the full details of the referendum here.

The technology portion covers student iPads and other equipment, as well as software and training (there’s lots of personalized instruction that can happen with technology these days, but you have to pay for it). The security levy is to upgrade school entrances and minimize the risk of school shootings. The stadium portion—which can only pass if the other two pass (very smart)—is to build a multi-use stadium at the high school. Currently the football team plays 2.5 miles away at one of the middle schools.

For a $200,000 home, this referendum will raise property taxes by $32 per year. The district has some helpful graphs showing our property taxes compared to surrounding districts, before and after the levy.

As parent in the district and the spouse of a kindergarten teacher (not in the district), I think education is hugely important. A similar referendum failed in the spring and I think it’s a big deal to pass this one. A previous technology levy is expiring this year.

Selfishly, I want my kids to have the technology they need. The safety is great too. And the stadium, well, I’m honestly indifferent (that’s why I like that it’s dependent on the other items passing—there will be no fancy football field without technology for education first).

So What’s the Controversy?

A nonprofit located in Chaska, Minn. (not in the district), called Better Ed is fighting the referendum. I received a postcard from them today, touting poor achievement in ISD 197.

Of course it’s not in context and some parts are flat wrong. Better Ed claims the district spends $15,000 per student each year, when it’s actually $11,000. Here’s the 197 District performance compares to our next door neighbors, St. Paul and South St. Paul: 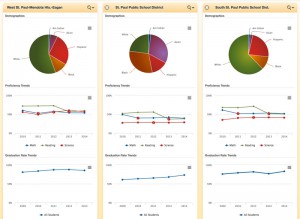 This is a screen shot from the Minnesota Department of Education Report Card site. (Note: the drop in reading scores across the board is due to new standards implemented in 2013.)

Could our schools be doing better? Yes. We should always be pushing for better results, especially in closing the achievement gap.

But is 197 performing so poorly compared to our neighbors? No. We’re doing better. That’s probably why a lot of kids cross over from other districts.

Who Is Better Ed?

So who is this nonprofit organization and what are they trying to do? I don’t know.

Apparently giving misleading numbers is not new for them.

They talk about wanting to “lead an educational renaissance” but they don’t want to fix the current system, work with legislators or educators, or make small changes. What do they want to do? Push home schooling? Charter schools? Private schools? Something else?

I don’t know. Mostly it seems they want to bash the current system and not offer a way forward.

So do your research and don’t trust every postcard that comes in the mail. ISD 197 has loads of info and there’s a group of parents and residents working to support the levy.

Decide for yourself. I know public education is not perfect. There are always ways we can work to improve it. But I also know our schools and teachers work hard (so hard!). It’s frustrating to see people criticize all that hard work without doing anything to help or even suggest alternatives.

Education is about our future—not just my kids (though I care about that)—but our nation and our world. It’s too important to let misinformation reign. Especially from people offering no solutions.

Update: This recent blog post from ISD 197 Superintendent Dr. Nancy Allen-Mastro on test scores and the achievement gap might provide some additional context.