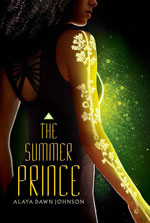 In a futuristic, post-apocalypse city state the political system is ruled by women and a summer king is elected every five years—only to be killed when the winter ends. Yes, The Summer Prince by Alaya Dawn Johnson has a complicated, dystopian setup. In a nutshell, men couldn’t be trusted after ruining the world, so women held most of the power.

But this year’s summer king is pushing the rules and he inspires teenage artist June as she struggles to figure out her place. Like everyone else, she’s intrigued by the new summer king and begins to push the boundaries of her art, the technology the ruling class allows and the very rules of society.

This one is bizarre and intriguing. Set in what used to be Brazil, we’re constantly catching up with the future world and the South American setting. Not everything is explained immediately, which is OK. It also moves along at a good pace, frequently skipping ahead weeks or months and not getting derailed in daily detail.

But it also gets into strange technology and bizarre cultural situations where it’s hard to keep up with what’s happening. That kills any page-turner tendency the story was developing.

It’s been considered among the best—at least by Rolling Stone— but I’m not so convinced. It’s definitely different and breaks some new ground (a future not dominated by white Americans—gasp!), but it’s not the must-read I yearn for.