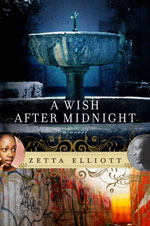 In A Wish After Midnight by Zetta Elliott a teenage black girl inadvertently travels from modern day to Civil War-era Brooklyn. It’s reminiscent of Octavia Butler’s Kindred, though it’s much slower paced. It’s more character driven, taking time to thoroughly introduce the reader to modern urban poverty and focusing on the racial differences between 1863 and the modern day.

While Kindred really dove into the time travel and let the social commentary speak for itself (more or less), A Wish After Midnight really chews on it. It’s interesting, but it’s not as satisfying or gripping of a read.

While not quite a slave in 1860s Brooklyn, Genna is still trapped with few options. In many ways, her choices and limitations aren’t that far off from modern days. There’s a lot to digest and in some ways that’s where it feels like there’s too much social commentary and not enough action. It’s good commentary, but it doesn’t have the page-turning wonder of Octavia Butler (which is a completely unfair comparison, but there it is).