Wing Young Huie is an incredible photographer based in the Twin Cities who is always creating unique glimpses of life that upend your expectations. He’s well known for a couple of books that explore urban life, including Frogtown in St. Paul and Lake Street in Minneapolis.

He’s also released two volumes of photos on University Avenue, an urban lifeline that connects St. Paul and Minneapolis. For about seven years we lived within minutes of this urban corridor and for a couple years I took the 16 route bus every day which follows University Avenue and is the most used bus route in the Twin Cities (and why lightrail is going in on University).

This University Avenue Project involved engaging people with questions and doing more than just documenting life. The project was also displayed along University Avenue, in some cases projected in giant format on the side of buildings.

MPR recently did a an Art Heroes Photo Gallery with Huie, collecting some amazing and engaging photos. Here are a couple of my favorites:

It’s cool seeing these glimpses of life in the Twin Cities, but more than just glimpses, they’re photos that push back. The photo subjects are given a voice, adding a new dimension to the standard photograph. It’s a great little collection. Love this town.

Since The Stephanies came out last month, Lexi and I have been having fun sharing the book with as many people as we can. Here are three great examples:

Letter from Denver
One of the incredible backers of our Kickstarter campaign turned out to be a teacher at Metz Elementary in Denver. She shared the book with her third grade class and then sent Lexi a letter. Lexi has fan mail! She included a letter from one of her students. Beverly writes, “I think that your story is very awesome.” Lexi was pretty excited to get the letter and now we’ll be writing back to Beverly and the third grade class at Metz Elementary.

South St. Paul Reading
Last week Abby had Lexi come to her second grade class and read The Stephanies. I was a little unsure how this would go. I thought second graders would be put off at being read to by a first grader. I thought Lexi would clam up and be too shy. Good thing it wasn’t my plan. It went great. The class loved Lexi. She did an amazing job reading the story and answering questions. While she’s often shy in situations like that, she figured out how to rise to the situation and shine. We’re pretty proud of her.

Here are a few pics from the reading:

Nigerian Reading
Then on Sunday we did a Skype call with another incredible backer of our Kickstarter campaign. These were friends living in Nigeria, so it was a great chance to connect, be goofy and read The Stephanies. Perhaps the best part of this international reading was that our friends in Nigeria had literally spent the day on the beach while we were bunkered down in the midst of a 10-inch snowfall.

Here’s a glimpse of that reading:

You Can Make It Happen
All of which is pretty awesome. It kind of sums up what a recent review had to say about The Stephanies: “I love it because they made it happen.” That’s the cool thing about The Stephanies. We didn’t do anything outrageous or nearly impossible. New technologies have put this stuff in reach of the common person, and we just pulled it together to tell a fun story. You could do it too!

If you haven’t picked up your own copy of The Stephanies yet, you can get all the details and versions available here.

It’s the essential question of life: Crackpot or genius?

So this Ph.D. in economics, Mark White, has this idea that museums could sell shares in their artwork to raise money. It’s this bizarre, crazy idea to somehow monetize the holdings of museums and give them new access to capital without selling everything off. The idea was being discussed because the Detroit Institute of Arts might be desperate enough to try it.

At the end of the article, White has the best quote ever:

Innovators, he points out, are frequently wrong. “I could be a crackpot,” he said, in a telephone call. “But I think I’m a genius.”

Don’t we all? How often do we have these ideas that are either brilliant or horrible? Maybe they’re both, depending on who you ask (one person’s crackpot is another person’s genius). And maybe when you ask. It’s such a great sentiment, acknowledging the reality of ourselves: Yeah, I could be a little nuts. But I prefer to think of myself as brilliant.

And perhaps that’s what separates the crackpots from the geniuses. If you never push your idea, if you never pursue it, if you never put in the hardwork to make it a reality, then you’re just a crackpot. But if you put in the time, the sweat, the energy—then maybe you are a genius.

I could be a crackpot. But I think I’m a genius. 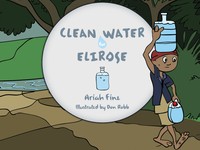 Clean Water for Elirose is a great little children’s book explaining the problem of dirty water around the world. I plugged the book before when it was a Kickstarter project and now the author, Twin Citizen Ariah Fine, is working hard to fund a clean water well. He’s trying to raise $5,000 through charity: water, a task I know well, and he’s offering to give a copy of Clean Water for Elirose for donating any amount to his charity: water project.

That’s a great deal: Give clean water, get a free book.

If you already have a copy (like me!) or don’t need one, Ariah will give your free copy to a classroom.

You can check out the book and read the entire thing online.

Consider making a donation. charity: water does amazing work and it’s always worthwhile supporting them. Plus: good book. Book projects like this definitely need to be supported and generous souls like Ariah who put so much sweat and tears into a project and then give it all away deserve your support.

Here’s a great video of Ariah’s kids getting ready to give away some books: 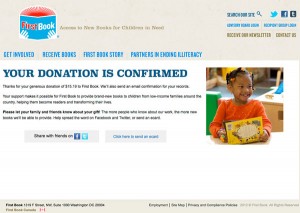 We launched The Stephanies last month and promised to share half our profits for the month of November with First Book. November is done and gone (and with it all those great Movember mustaches!) so it’s time to tally our sales and make a donation.

We sold a whopping 7 print copies and 8 digital copies, for a grand total of $30.38 in royalties. So we’ll make a donation to First Book for $15.19. Doesn’t sound like much, but it will provide six new books to kids in need. That’s pretty cool. Thanks to everyone who bought a copy!

Those sales can be combined with the 36-some odd sales from our Kickstarter campaign and that’s pretty great for a self-published book written by a 6-year-old. How many books did you sell as a first grader? I’ve got a big ol’ nothing in that count. Creating this book, sharing it with the world and giving back in a tiny little way has been pretty awesome. The numbers don’t sound like much, but we weren’t in it for the numbers.

More than anything I had a blast doing it with Lexi. I now owe Milo a book project of his own. And this is a great test case for how kids can make their own books (not to mention how to use Kickstarter).

While we’re no longer donating our profits (we’ll now siphon the cash straight to Lexi’s college fund), you’re welcome to grab your own copy of The Stephanies. We’ve got the original paperback, a “Color-Your-Own” paperback, and digital versions for the Kindle, iBook & Nook, and the standard PDF version. It’s a great little gift for the kid in your life, no matter how old they are.