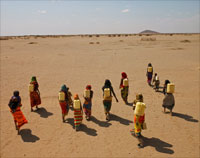 The April issue of National Geographic has an in-depth story on water in Southern Ethiopia. This hits home for a number of reasons—including our continuing commitment to clean water (we’re trying to build a well, remember?) and the fact that Southern Ethiopia is Milo’s birthplace.

I’ll pull out some especially poignant moments, but I’d suggest you read the whole article (read the printer version to avoid pagination)

The article ends on a heart-breaking note:

“She has never dared think that someday life could change for the better.”

That’s a brutal reality we’ve left our fellow brothers and sisters in. That’s why a portion of the proceeds from my book are going to build a well in Ethiopia. I hope you’ll buy a copy. Or forget the book—make a donation directly to charity: water.