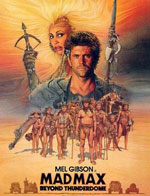 While interesting for some of the post-apocalyptic ideas I’m looking at, this movie is otherwise bizarre. It works for me up until the Thunderdome fight ends and Max is banished. Then it goes into bizarr-o movie land. It’s kind of a mishmash of a third Mad Max movie, with some Lord of the Flies and some recycled Road Warrior thrown in (Hey, why not?: All the other Mad Max movies had great chase scenes and they must have had funky cars left over from Road Warrior). What’s especially weird is that the pilot in Beyond Thunderdome is played by the same guy as the pilot in Road Warrior, Bruce Spence, yet they seem to be different characters.

I love that Roger Ebert called it “not only the best of the three Mad Max movies, but one of the best films of 1985.” A year that included Back to the Future (also, Pee-Wee’s Big Adventure).

While it does star Tina Turner as a diabolical despot, I just can’t rate it that high. Mel Gibson spends more time wandering through the desert than the hobbits spent walking around Middle Earth. On the plus side, nobody survives a nuclear blast by hiding in a refrigerator, so bonus points (Yeah, I finally saw Indy 4 this week. Ouch).

One thought on “Mad Max: Beyond Thunderdome is Beyond Bizarre”