Yesterday President George W. Bush laid a wreath at the tomb of Dr. Martin Luther King Jr. on what would have been his 75th birthday while protesters chanted in the distance.

Many protesters accused Bush of staging a photo opportunity, citing King’s non-violent stance. The image of a president leading a divided country into a questionable war standing at the grave of a man who gave his life for peace seems a bit disjointed.

In a twist of history, city buses were used to block any view between the protesters and the president.

The selling of my childhood on eBay has begun. Well, I suppose it began several years ago when I liquidated my G.I. Joe collection. Now I guess I’m selling my pre-teen and teen collectible phase.

Get ’em while they’re hot, decade-old NASCAR collectibles! Wahoo.
(all proceeds go towards a computer that doesn’t suck)

101 Ways to Save Apple – A Wired article from 1997 (link via Kottke), before all the cool things Apple’s done recently, including the Think Different campaign, the iPod, and both iMacs. What’s really interesting is how many of the recommendations have happened, including:

14. Do something creative with the design of the box and separate yourselves from the pack. The original Macs stood out because of their innovative look. Repeat that. Get the folks at Porsche to design a box. Or Giorgio Giugiaro. Or Philippe Starck. We’d all feel better about shelling out the bucks for a Power Mac 9600 if we could get a tower with leopard spots.

98. Testimonials. Create commercials featuring real-life people in situations where buying a Mac (or switching to a Mac) saved the day.

7. Don’t disappear from the retail chains. Rent space in a computer store, flood it with Apple products (especially software), staff it with Apple salespeople, and display everything like you’re a living, breathing company and not a remote, dusty concept.

40. Cash in on millennium fever with an ad campaign that portrays Apple as a return to basics, a rediscovery of simplicity and purity, a rejection of complexity. (I don’t know if the millennium part happened, but they’ve definitely started hyping their simplicity)

52. Return to the heady days of yore by insisting that Steve Jobs regrow his beard. (I’m not Jobs freak, so maybe that’s just scruff, but close enough.)

My computer just crashed. Let’s try to channel that anger into some magnetic poetry:

Fumbling toy of rotting fat,
soon you are dirt
that we will never miss.
Will the day come?

As dumb as the show is, it’s hilarious. My favorite part is watching Tammy Faye interact with — well, everyone. It’s like watching the Pharisees hanging with the lepers. Actually it’s not that bad. Tammy does a pretty decent job of not being incredibly judgmental. She has to live with these people, and she’s doing a decent job of showing them love.

My favorite moment was when she plugged her ears during one of Rob’s profanity-laden bleep sessions. Then she asked him why he always swears, and admits her penchant for the word “crap.” She said she was on Christian TV the other night and said crap and they bleeped her out. I laughed out loud. Then she said she had to resort to something else, but they bleeped that out. I’m curious if she actually swore or if they just bleeped out whatever she said for effect. Either way it was a really funny moment. I’m just envisioning Tammy Faye on a Billy Graham TV special and suddenly she’s bleeped out for saying crap. Now everybody thinks she said something ten times worse.

Ah, Christian TV. The only thing more surreal than The Surreal Life.

This is the 1950s version of ‘this is your brain on drugs.’ The drawing is from a series of sketches done by a man under the influence of LSD, part of a government experiment on the effects of the drug.

OK, I’ve got a beef with web designers who use all Flash. Have we ever heard of usability? Apparently not.

A few weeks back I switched to the Firebird browser because IE was being stupid. Seemed like a good idea at the time, though since I’ve noticed that the Flash plug-in doesn’t stay plugged in. Every time I launch Firebird I have to reinstall Flash. Now maybe I’m just an idiot and I’m not doing something right, but it’s a pain. For the most part I don’t bother reinstalling Flash every time. Which means any sites that use Flash can be difficult.

Now a site like Relevant uses Flash, but it’s only for enhancements on the page. I can still check their recent updates without needing Flash. It adds some nice visual elements, but not having Flash doesn’t ruin my experience. On the other hand, some web designers insist that you have Flash to see anything on their site. The bands Jars of Clay and Sanctus Real are two examples. If you don’t have Flash you can’t get anything.

Now let’s think about this for a minute. You’re not just making it difficult for people to surf your site, you’re making it impossible. You’re knowingly shutting out a certain percentage of people from your site (anybody know what that percentage is? UPDATE: OK, I looked it up myself. 98% of Internet users have Flash. Though the numbers are baked. 98% is for Flash 2. We’re currently on Flash 7, which has 7.2% of Internet users. Flash 6 is still at 90%, so they’re doing pretty good. I guess you’re not shutting out that many people [though why would you want to shut anyone out?], but more importantly, they’re still making difficult-to-use sites. Lame.). And what do you gain? Some cool effects. Oooh. Bands are notorious for using Flash exclusively.

The downside is that most all-Flash sites suck. Often they give you a number of little text frames to scroll through (and where are the freakin’ scroll buttons! If you can even find them, they all work differently!) or they pop up windows all over the place. It’s a navigational and usability nightmare. If you want to have all the fancy effects, use them strictly for effects. Let HTML handle the text, which will make your site simpler, easier to use, and compatible with a much larger audience base.

I’ve noticed graphic design houses do this as well. They want that wow-factor so they make this crazy Flash site. Yet the site is terrible to use. Why on earth would I hire you if you can’t make a site I can use?

You can certainly use Flash, it’s a cool effect. Just allow your site to still function without Flash. Or offer an HTML alternative (like U2). Very few sites can justify all-Flash, and when they can it usually involves lots of animation, like Homestar Runner.

I know I sound like Jakob Nielsen, but I just want a site that’s easy to use. Is that too much to ask? It’s like punishing someone for being interested in your business. 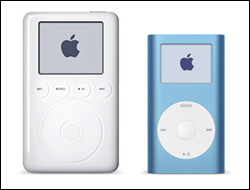 Yesterday Apple announced its new smaller, slimmer, not-much-cheaper iPod. The 4 GB iPod Mini is two-thirds the size of the original and will cost $249 — $50 cheaper than the 15 GB iPod also announced yesterday.

That’s two-thirds the physical size, less than one-third the storage space, for five-sixths the price. Not exactly the cheap techno-temptation I was hoping for. Though it does offer five times the color choices: silver, gold, green, pink, and blue.

A person’s moral and spiritual foundations are solidified as children, according to a study by George Barna. By age 9 a person’s moral foundation is in place, though some views may shift or be refined. By age 12 the majority of Americans make a decision about the importance of Christ’s death and resurrection in their life. By age 13 a number of core spiritual beliefs are irrevocably formed, including beliefs on the nature of God, the existence of Satan, and the reliability of the Bible.

The research also showed that 4 out of 5 church leaders were consistently involved in a children’s ministry when they were young.

This research backs up stories I’ve often heard that most people accept Christ before the age of 18, all of which places incredible importance on ministering to kids.

A lot of it I don’t even think of as sharing the Gospel with kids, so much as giving kids a solid moral and spiritual foundation. What kind of attitudes are we modeling for kids about justice and racism and charity?

And this isn’t just about what’s happening in Sunday School or in classrooms (though it’s certainly a challenge for more Christian teachers to make their stand in the public schools), but what parents are doing. 85 percent of parents think it’s their job to teach their kids about faith, but most parents don’t spend any time doing it in a typical week (source: Barna again).

Our beliefs and ideas can certainly change as adults — many people have had life-altering and belief-changing experiences. But for the most part, people make their decisions as kids. Barna’s latest book, Transforming Your Children Into Spiritual Champions, details the findings.

“And he said: ‘I tell you the truth, unless you change and become like little children, you will never enter the kingdom of heaven.'” (Matt. 18:3, NIV)

“Jesus said, ‘Let the little children come to me, and do not hinder them, for the kingdom of heaven belongs to such as these.'” (Matt. 19:14, NIV)

“But when the chief priests and the teachers of the law saw the wonderful things he did and the children shouting in the temple area, ‘Hosanna to the Son of David,’ they were indignant. ‘Do you hear what these children are saying?’ they asked him. ‘Yes,’ replied Jesus, ‘have you never read, “From the lips of children and infants you have ordained praise”?'” (Matt. 21:15-16, NIV)

Oh my gosh. This is great. A delicious parody that seems to nicely tie in with my thoughts of late: “A Message from Pat Robertson and the ‘Vote No On Jesus’ Campaign” (link via Knightopia via Veen.com).

My favorite line: “‘Tax-And-Spend Jesus’ wants us to believe that our hard-earned money should be pumped into godless public schools and the sinful homes of single-mother welfare queens.”