Last night I went to hear Rev. Lauren Stanley speak about the relief efforts in Haiti (after catching the end of the Daytona 500, of course, which made me a little late). She is a missionary of the Episcopal Church appointed to serve the the diocese of Haiti and has been asked to remain in the United States, coordinating immediate relief efforts and long-term development through the Episcopal Church and Episcopal Relief and Development.

So basically her boss is the Bishop of Haiti, Jean Zache Duracin (last I heard he was living in a tent). The Episcopal Church of Haiti is running something like 20 refugee camps and caring for more than 20,000 people. Among those are the priests, parishioners, parents and students of the churches and schools with which my own church has had a 20-year partnership.

So Lauren Stanley was giving Twin Cities churches an update on what’s happening on the ground in Haiti. I went to hear what’s happening in Haiti and learn how the money Color4aCause has raised is helping (a tiny, tiny fraction of the money that’s been raised). Lauren had sobering updates, butt-kicking statements and in-depth stories and history to share. She’s a firecracker.

END_OF_DOCUMENT_TOKEN_TO_BE_REPLACED

All the best laid plans blow up. Especially when you get sick. For a week. Or two.

That’s my story. I’m going on week number two of being sick. This has to be the third or fourth time I’ve gotten sick this winter. Bleh. I’ll spare you the details (nothing worse than reading about people’s medical symptoms online—unless of course you’re looking for an online diagnosis by strangers, which can be loads of fun), except to say that I think the sinus pressure has blocked the hearing in my left ear. Feels like I went swimming and can’t get the water out. Otherwise I’m actually feeling better. And losing your hearing can have its benefits. Milo has an ear infection and has been pretty crabby—but his tantrums are that much quieter now.

On the plus side, Foursquare.org published an article I wrote yesterday. “Advocate for the Invisible” tells the story of homeless advocate and InvisiblePeople.tv founder Mark Horvath. I talk about him a lot, so it was fun to tell his story. It was also a challenge to do it in under 800 words. That article easily could have been twice as long. When I interviewed Mark for the story we talked for over three hours, so you can imagine the material I have and couldn’t possibly use. Good stuff.

Mark is a constant inspiration. The way he continues doing what he does despite all odds is incredible. As he says, he’s not called, he’s forced. He has no choice but to do this. He has a choice all right, but I’m not sure he could live with himself if he walked away from the homeless people he serves. I could use that kind of heart. 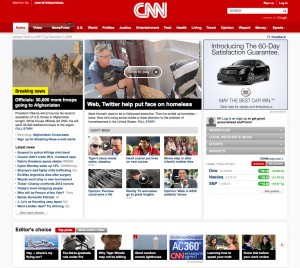 A couple weeks ago homeless advocate Mark Horvath came through the Twin Cities on his InvisiblePeople.tv road trip. I had the chance to hang out with Mark, see him in action and briefly join him in his work.

We went to the Dorothy Day Center in downtown St. Paul (driving in the fancy Ford Escape Hybrid that Ford generously loaned Mark for the trip), handed out socks courtesy of Hanes and talked to homeless people. Mark tapped away on his iPhone, posting updates to Twitter, pictures to Posterous and recording video for InvisiblePeople.tv. It was a humbling experience, especially hearing their stories of facing one hardship too many and losing it all. Many of them had lost jobs and homes recently and were on the street thanks to the current recession. A homeless ministry was serving lunch while we were there and a number of people kept coming up and asking them for blankets and sleeping bags. Cold is coming in Minnesota. I really value Mark’s perspective on the homelessness issue because he’s been there before and understands it in a way many people don’t. He also understands the practical realities. Frankly, it’s devastating to walk out here and talk to people, knowing I have a cozy warm bed and home, plenty of blankets, sheets and even a spare room. Whatever I’m doing to help the homeless, there’s always more I could do. I realize inviting a stranger into my house isn’t always practical (nor approved by my wife), but tell that to the person sleeping on the sidewalk. I don’t know how Mark has traveled the country doing this. He always talks about it wrecking him, and now I can understand why.

A few people asked me for money and I had to say no. I could empty my bank account handing out cash, but who knows what good it would do. I took great comfort in the garbage bag of brand new Hanes socks we were handing out. The very least I could do was hand out socks and listen.

Mark called me one of his heroes, but I don’t get that. He’s the hero. He’s the one practically homeless himself, living on the ragged edge without a real job or steady income trying to tell the stories of the homeless. On Tuesday night my wife and I took Mark out to dinner. It was my wife’s birthday and we’d gotten a babysitter so we could have some actual conversation with Mark. When the check came I got totally schooled in the credit card draw. Mark had grabbed the bill and slapped down his card before I could even react. Even the waitress was impressed. I tried to protest but it was too late. Mark insisted and paid for our dinner, including dessert. That’s the kind of guy he is. He’s the hero.