Lately I’ve been reading about the civil rights movement and World War II is yet another area that has captured my interest. Racial segregation was the norm across the South, in the nation’s capital and also in the armed forces. Even blood collected for wounded soldiers had to be segregated by order of the War Department.

In that atmosphere of inequality and second class citizenship, it’s not hard to see parallels between the fascist and racial supremacy ideals of Hitler and the segregation of Jim Crow.

As civil rights activist (and my new hero) Pauli Murray put it in a letter to Eleanor Roosevelt, “We are as much political refugees of the South as any of the Jews of Germany.” As the Holocaust showed Hitler’s tyranny was far more gruesome and deadly, but blacks in the South faced lynchings, intimidation and degradation as a way of life. White racists of the South weren’t that far removed from Nazi Germany.

Murray argued for equality as part of the war effort, saying: “We cannot come into the world struggle for democracy with dirty hands.”

As the draft began blacks posed a fair question: “Should I sacrifice my life to live half American?” That’s how James G. Thompson of Wichita, Kan., put it, as he proposed the Double V campaign:

Published and promoted by the Pittsburgh Courier it became a rallying cry that gave blacks an opportunity to support the war effort and maintain their dignity.

The Double V campaign didn’t succeed initially on the home front, but in 1948 Harry Truman ended segregation of the armed forces by executive order. In the 1950s other challenges to segregation would mount and it would eventually crumble beneath the march of the civil rights movement in the 1960s, 20 years after World War II and the Double V campaign.

Lately I’ve been reading about the civil rights movement and it’s incredible.

Everyone knows that, but reading the details is something else.

I could probably write a lengthy post going into all kinds of details, but there’s just too much to say and that’s too hard to swallow. Instead I think it’ll be easier (for you and me) to just throw out random thoughts as they come.

Tonight I was struck by how a nostalgic view of 1950s America has to be completely blind to issues of race.

I imagine 1950s nostalgia is blind to a great many things. But race seems like the most offensive.

Viewing the 1950s as the golden age of America forgets that Jim Crow was in full force in the South. Even though court rulings had dismantled segregation, it still existed as a practical matter. Much of the civil rights movement was about claiming what had already been won in court and was being illegally denied.

It’s a shocking thing to consider. Comparisons don’t do it justice, but they help put it in perspective. The Supreme Court recently struck down California’s Prop 8, making gay marriage legal in the state of California. Imagine if gay people went to California to get married and were not only turned away, they were arrested, beaten and jailed?

It’s inconceivable today. Yet that’s what happened with the Freedom Riders in Mississippi.

The 1950s were hardly a rosy time of peace, prosperity and good morals. Especially for blacks in the South. 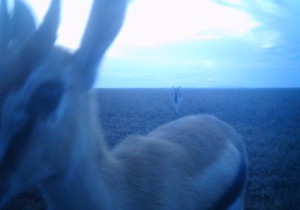 Snapshot Serengeti is a project started by University of Minnesota researchers to learn more about wild animals in Serengeti National Park in Tanzania. They’ve set up a grid of 225 cameras that take snapshots of animals, allowing the researchers to identify, track and study the animals.

The automatic cameras capture things that few scientists or tour guides ever see. It gives them insight into the animals, helping them figure out how animals are able to coexist. Plus, they capture some amazing pictures.

The best part of the project is that they need your help. The cameras take millions of pictures and they post them online and ask for your help identifying the animals in the pictures.

You’ll spot all sorts of cool animals while you’re doing it. I came across a herd of zebra, a lounging lion, an elephant that walked right past the camera, and the above gazelle that was checking out the camera. You’ll also come across lots of empty savannah, when the camera was triggered but no animals are visible. Those shots are kind of disappointing, but you’re still helping the researchers and it’s a beautiful glimpse of the Serengeti.

The researchers are also running out of funding and need your help. You can contribute to their Indiegogo project and keep the science going.