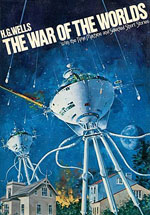 You may not have noticed yesterday, but aliens rose up and crushed mankind before succumbing to the common cold and dying off. One person described the mayhem like this:

“Smoking, smoldering hunks of buildings, cars, and people lay strewn about. The tripods have left the Warehouse District in ruins.”

If it sounds familiar, it should be. Some enterprising folks recreated the War of the Worlds radio drama on Twitter. Instead of fictional news accounts about aliens, people posted fictional Twitter updates about aliens. There were also fictional photos and even videos. Wired covered the story and perhaps as many as 10,000 happened upon the event.

And I’d wager many of them were confused.

Not the Best Medium
I was pretty intrigued by this whole idea of using Twitter to rely a fictional event. After all, it’s incredible to watch the live reaction on Twitter to real events. But I think that’s where it failed: the blurred line between reality and fiction. Twitter mixes all the people you follow together. So any fictional tweets are mixed in with the real ones. This is a sharp contrast to the original War of the World radio drama where you only would have heard the fiction. It’s analogous to listening to the radio drama and then switching over to another station that’s reporting no alien invasion. It breaks the illusion. Only on Twitter you don’t have to change stations to break the illusion. All the other people you follow are constantly breaking the illusion.

Scale?
So maybe it’s a matter of scale. Of the 170+ people I follow, only three actually mentioned the event, and one was the event organizer (of the remaining two, only one had sustained updates). Perhaps if a greater percentage of the people I followed were taking part it would have worked better. But I doubt it.

Fiction vs. Reality
Something about the project in general felt dissonant to me. Maybe it’s the fact that we’re in a society where people are always questioning the credibility of what they hear. I’m constantly pointing people to Snopes to debunk rumors, encouraging them to think a little bit more. Even today when the prank call with Gov Palin came to my attention, I assumed it was a fake. So in that environment the idea of doing a fictional story with the intent of duping people seems like a bad idea. Now granted, the idea here wasn’t to dupe people. It was mere entertainment. But in a medium like Twitter where that entertainment is mixed with reality, it seems easy to feel duped. Breathless accounts of destruction, even fictional destruction, are eerily reminiscent of 9/11. I don’t mean to play the 9/11 card, I just think it’s an odd when trusted channels are spitting out fiction that can easily be mistaken for reality.

I guess if you’re going to do fiction, I’d rather it be on an obviously fictional channel (like The Onion). Or at least over the top to the point of being obviously fictional. I had some experience with this earlier this year when I Twittered fake vice presidential candidates. It’s a difficult balance to strike, especially when you can’t ensure people get the message of what you’re about to do.

Bottom Line
I see it as a very interesting experiment, but one I didn’t ultimately enjoy (honestly, fictional posts about the potential death of your friend and their family are kind of disturbing). And I don’t mean to be harsh—I’m just talking out loud and trying to explain why this didn’t resonate with me (even though others <a href=”http://twitter.com/joshlewis/status/985261924″>describe</a> it as the most fun they’ve ever had on Twitter). I like seeing this kind of experiment, but not all experiments succeed.

(Though I will say it’s cool to see my friend Josh Lewis come up again and again for his participation in this project.)

One thought on “War of the Worlds on Twitter”